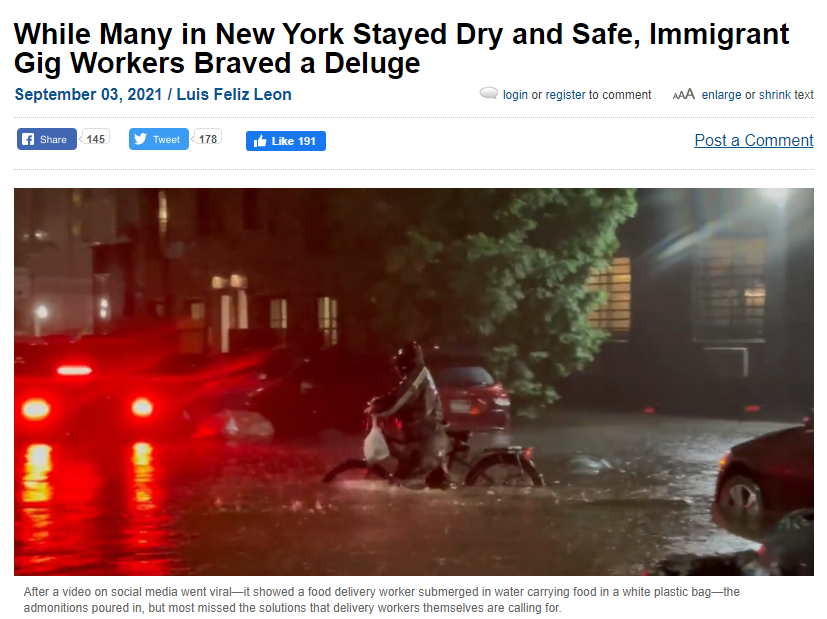 (NEW YORK CITY) - During a typical downpour, the rainwater also pours gobs of cash in tips into the pockets of Immigrant Gig Workers as they zip around the city delivering takeout to New Yorkers hunkering down at home.

Flash flooding warnings are not a case for worry - they are signs of a boon to come, as Food Delivery Apps like GrubHub, DoorDash, and Relay offer bonuses to entice Workers to traipse through snow and rain to feed homebound residents.

On these days of extreme weather, upwardly mobile customers are apt to be less stingy, but the incongruity between the expectation of high earnings and the realities of a hurricane storm dumping a historic five to seven inches of rain couldn’t have been starker on September 1st.

Reynoso was delivering food for GrubHub at 9 p.m. in Manhattan when his $1,300 scooter broke down.

The Food App paid him $5 based on time spent and miles traveled for that order and the customer tipped him $6 - his total earnings after working 10 hours that day was $240.

He says GrubHub had a $12 promotion for completing three delivery trips in a row, but his decision to brave the rain cost him $160 to repair the carburetor on the scooter after it filled with water and stranded him miles from his home in the Bronx.

Reynoso is an Independent Contractor - but one with severely circumscribed independence.

He isn’t allowed to decline orders after signing up to be on the App schedule for deliveries.

He doesn’t receive health care, paid time off, Workers’ Compensation or even a Minimum Wage guarantee – and GrubHub isn’t responsible for fixing his wrecked scooter’s motor.

The trail of destruction left behind by Hurricane Ida rendered inoperable hundreds of scooters that Immigrant Gig Workers like Reynoso depend on to earn a living, said Ligia Guallpa, the Executive Director of Worker’s Justice Project.

The Worker Center in Brooklyn, which has provided critical support to Los Deliveristas since the group was formed last year, is running a fundraiser to help Workers fund repairs and pay for replacements.

At least 21 people are dead in New York and New Jersey.

Eleven of the fatalities occurred in Queens, where residents died trapped in their homes as water rushed in.

They had heeded the official message from Mayor Bill de Blasio: “Stay inside.”

To Continue Reading This Labor News Story, Go To: https://labornotes.org/blogs/2021/09/while-many-new-york-stayed-dry-and-safe-immigrant-gig-workers-braved-deluge