New Gallup Poll Shows That At 65%, Approval Of Labor Unions In The United States âRemains Highâ 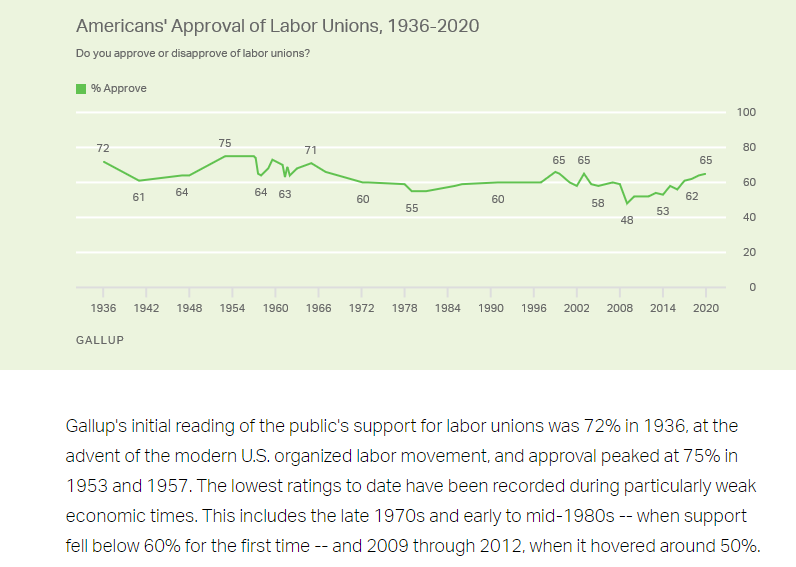 (WASHINGTON, D.C.) - As Labor Day approaches and economic conditions in the U.S. remain tenuous, Americans' 65% approval of Labor Unions is once again the highest it has been since 2003.

Public support for Labor Unions has been generally rising since hitting its lowest point of 48% in 2009, during the Great Recession.

The lowest ratings to date have been recorded during particularly weak economic times.

While the latest reading, from a July 30th to August 12th poll, comes at a time of severe economic upheaval, this has so far not had a negative impact on the public's view of Unions, as it is little changed from last year's reading.

Americans' support for Unions is politically polarized, as it has been since 2001, when Gallup began tracking the measure annually.

Democrats' current 83% approval of Labor Unions is the highest on record since then.

At the same time, 45% of Republicans and 64% of Independents approve of Unions.

Since the Great Recession, Union approval has recovered among all three major party groups.

Americans' reported Membership in a Labor Union remains similar to recent years, with 10% saying they are a Union Member.

Overall, 16% say there is a Union Member in their household.

Americans' approval of Labor Unions has been consistently high for several years and has more than recovered from low points around the Great Recession.

Even as the U.S. grapples with the Coronavirus Pandemic and the resulting economic crisis, which includes record-high unemployment, support for Unions remains strong.

Previous Gallup data have found that while Americans largely think Unions help their own Workers, they are less inclined to say they are helpful to the U.S. economy overall.

As such, support for Unions has been weaker during challenging economic times.

Americans' continued high approval of Unions may result from a current focus on issues other than the economy.

Generally, when economic indicators have been negative, the economy has been viewed as the most important problem facing the Nation, but that is not the case now.

The public is divided in its assessments of the biggest U.S. problem, with roughly one in five each citing the Coronavirus, the economy, race relations and leadership.

To Directly Access This Labor News Report, Go To: https://news.gallup.com/poll/318980/approval-labor-unions-remains-high.aspx