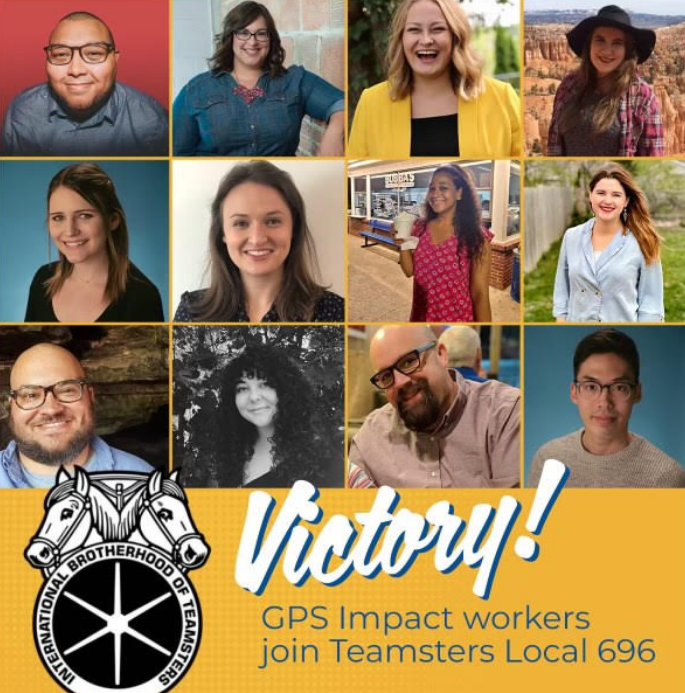 The 28 newest Members of Local 696 work in a wide-range of communications, digital and media roles for the political media firm.

Workers overwhelmingly signed up to become Teamster Members, according to Claire Cook-Callen, a Senior Strategist at GPS Impact for over seven years.

“The Workers at GPS Impact coming together to organize in our Union is a testament to the work we do.  We love working in this field, and we want to create a workplace where we can all thrive and stay long term,” Cook-Callen said.

“GPS has fostered a culture of listening to and learning from Employees, and for us, this campaign has been about securing a collective voice and building an even more supportive environment.  We are thrilled to be represented by a Union as historic and powerful as the Teamsters,” she added.

Cook-Callen and her Co-Workers reached out to Local 696 in July.

“Workers had been talking about forming a Union for several years and I’m thrilled that our management has been so open about representation.  I hope that GPS can serve as the catalyst for other Workers to seek the representation that they deserve.  While we are well aware that most Workers don’t have the luxury of securing voluntary recognition, this journey is worth it.  We are proud to be Teamsters,” Smith said.

GPS Impact is a public affairs and multi-media advertising agency that provides candidates, advocacy groups and organizations with strategic communications, advertising and more.

“We couldn’t be happier to represent this dedicated group of Workers.  This group has long understood the importance of the union and believe deeply in the Labor Movement.  This is a special win.  This Unit works for the very cause Teamsters throughout North America fight for every day,” Teamsters Local 696 Secretary-Treasurer Matt Hall said.

“We are proud to welcome them to Local 696 and look forward to securing them a contract that honors their belief in a collective voice,” Hall added.