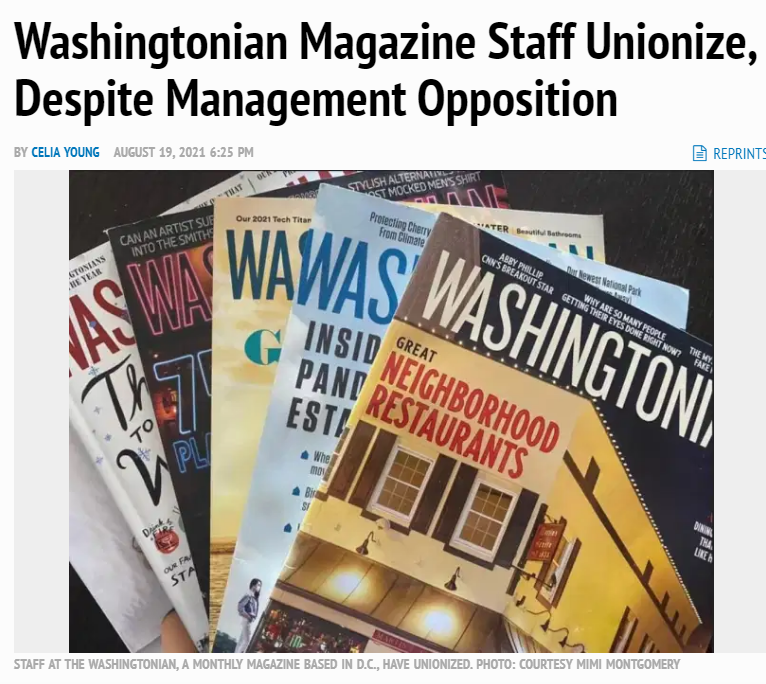 (WASHINGTON, D.C.) - The Staff of The Washingtonian Magazine has Unionized after the Guild won its National Labor Relations Board (NLRB)-supervised Union Election with a 15-to-2 vote.  A public push for a Union came a month after the company’s CEO published a controversial, top-down, back-to-office plan approach in an Op-Ed.

In May, Staff of the D.C.-focused publication organized a one-day Strike after CEO Cathy Merrill published an Op-Ed that many saw as threatening Staffers if they did not return to the office.  A month later, Workers began a Union Push that was a long time coming, an Editor told The Commercial Observer at the time.

Now that the Washingtonian Guild has won the election, despite not receiving support from management, the Union will begin negotiating for fairer compensation, a more diverse and inclusive newsroom, a healthier office culture and improved transparency, among other goals, according to a statement from the Guild.

“The Workers at Washingtonian stood up to their CEO by swiftly gathering together to form a Union for the betterment of their workplace,” Washington-Baltimore News Guild President Fatima Hussein said in a statement. “Their act of courage in the face of possible retribution is nothing short of inspiring.  We are supremely proud to be associated with (the) Washingtonian Guild and welcome them with open arms to the Washington-Baltimore News Guild.”

Unionized Employees, including Editorial Staff Members, Arts and Website Workers, are joining the Guild, which represents The Washington Post, The Baltimore Sun and Foreign Policy, among others.

There are 18 Staff Members that compose the Union, said Jessica Sidman, The Washingtonian’s Food Editor and a Union Member, said in a statement to The Commercial Observer.

Members will pay 1.4% of their salaries in Union Dues, but only after the Members sign a contract.

The Union is in the process of choosing a four-person Bargaining Committee that will meet directly with management to negotiate a contract, Sidman added.

The Union Push began in June, after Merrill’s ill-fated Op-Ed and the resulting Strike.

Employees planned to advocate for better conditions, including more transparency in management decisions, fair compensation for Staff Members and better family leave, as well as a concrete plan to increase diversity at the magazine, The Commercial Observer reported.

At the time, Washingtonian management informed Staff that they would not recognize the Union.

“The results of this election affirm the power of our collective voice,” Assistant Editor Daniella Byck, who has been at The Washingtonian since 2019, said in a statement. “We look forward to working with management to craft a fair contract and shape our future together.”

To Read This Organizing Labor News Story In Its Entirety, Go To: https://commercialobserver.com/2021/08/washingtonian-magazine-staff-unionize-despite-management-opposition/