âBy Forming This Union, We Are Telling Starbucks That We Want To Bring Our Own Chairs To The Table That Was Built Upon Our Backsâ - Buffalo Area Starbucks Workers âFile For Historicâ Union Recognition Vote 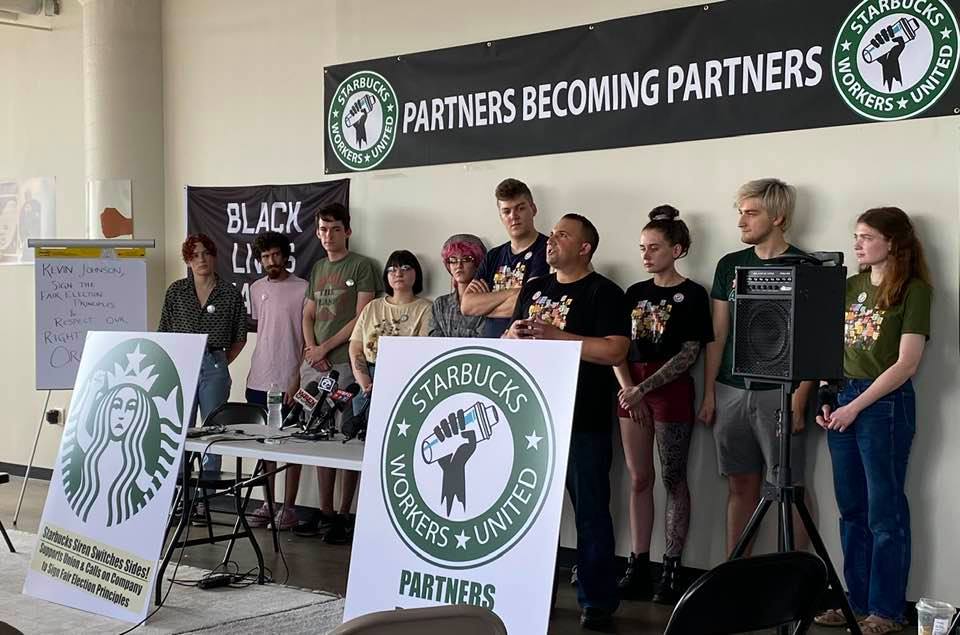 (BUFFALO, NEW YORK) - Starbucks Workers employed at three Buffalo area stores - on Camp Road in Hamburg, Genesee Street in Suburban Cheektowaga and on Elmwood Avenue in Buffalo, filed petitions this week with the National Labor Relations Board (NLRB) to hold official Union Elections.  If successful, the three stores would become the only Starbucks Retail Workers out of over 8,000 corporate stores in the United States to be represented by a Union.

The NLRB filings come on the heels of Baristas under the name SBWorkersUnited launching a historic organizing campaign.

Early last week, an Organizing Committee of 50 Employees from 14 different stores in the Buffalo area sent their demands to CEO Kevin Johnson for meaningful partnership in the operation of their stores and non-interference in the Unionizing process.

Support for a more meaningful partnership with the company has spread rapidly among Buffalo area Baristas and management from other area restaurants, such as Spot Coffee and Nani’s Kitchen, have signed on to these organizing principles in recent Union Organizing Drives.

The Organizing Committee has since grown to nearly 80 Employees from stores across the Buffalo region.

“By forming this Union, we are telling Starbucks that we want to bring our own chairs to the table that was built upon our backs,” said Katie Cook, a Barista at the Walden store. “In my eleven months at Starbucks, I’ve been promoted and made amazing friends, but I’ve also seen almost thirty partners leave and working conditions fall to the wayside.”

Gianna Reeve-Bartz, a Starbucks Worker at the Hamburg store, echoed Cook’s words: “Working at Starbucks can often be stressful and taxing, especially when one feels that they have no voice.  This campaign is so significant because we are working to provide partners with a voice they never had before.”

Buffalo area Starbucks Workers point to a collective frustration surrounding the fact that the company calls its Workers “partners,” not “Employees.”

Loretta Scherrer, a Worker at the Transit Commons store in East Amherst, referenced the company’s mission statement: “To be a partner is ‘to inspire and nurture the human spirit - one person, one cup, one neighborhood at a time.’  From the start of my coffee journey to now, I feel that this mission has been forgotten.  Instead of nurturing the human spirit, we are nurturing our machines for profit.”

According to Caroline Lerczak, a Co-Worker of Rizzo’s at the Cheektowaga store, the Coronavirus Pandemic has exposed the rift between partners and top management.

“Working through and returning to work during the pandemic was scary.  Partners were faced with the tough choice of unemployment or potentially dismissing their health concerns.” Lerczak said. “Partners had a lot of shared concerns and ideas and forming a Union is the best way to advocate for ourselves.”

Buffalo area Baristas are supported in their campaign by Workers United Upstate.

According to Gary Bonadonna, Jr., who heads the Union, Baristas have been approaching the Workers United Upstate to seek advice on building an organizing drive since prior to the pandemic.

“I was immediately impressed by the baristas from across the region.  We are so excited to voice our support for them in their drive for a better Starbucks,” Bonadonna said.

Added Danka Dragic from the Cheektowaga store: “We hope to inspire Fast Food and Restaurant Industry Workers in Buffalo and from around the country.  We deserve to have a say in the conditions of our labor and we deserve a better share of the rewards that we create.  We want a successful Starbucks for our customers and our partners and we hope the CEO will see that we have something meaningful to say.”

For More On This Labor News Story, Read These Reports, Headlined:

Buffalo Starbucks Workers Say They Will Unionize One Store At A Time At https://inthesetimes.com/article/buffalo-starbucks-workers-union-labor-india-walton-colectivo