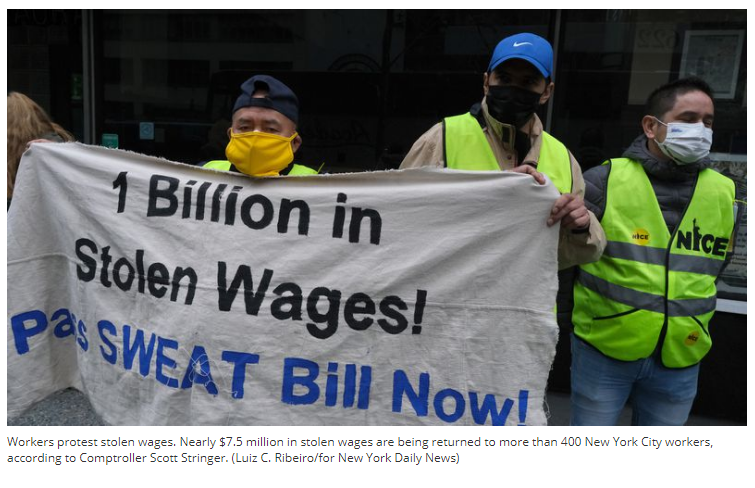 The funds owed to more than 400 Workers were uncovered through the Comptroller Office’s Bureau of Labor Law, which enforces Prevailing Wage and Benefit Rates for Construction Workers employed by city contractors on public work projects.

The Bureau, which investigates shady contractors based on complaints and suspicious activity, has gotten more than $22 million in stolen wages back to Workers since 2014, his office said.

“During the economic hardship of the COVID-19 Pandemic, it’s more important than ever that Workers get the wages they are rightfully owed,” Stringer said in a statement.

Laborers who have been cheated are sometimes wary of outreach efforts by the Comptroller’s Office and the pandemic made it even trickier for Staffers to make contact.

They set up a phone-bank campaign instead of doing the usual door knocking.

“I am proud that my office, in partnership with Labor and community-based organizations, has connected more than four hundred workers with ($7.5 million) in stolen wages,” Stringer said.

The Comptroller’s Office runs a website with the names of Workers believed to have been ripped off.

Stringer told The New York Daily News that the unclaimed wages can be a big boon to Workers reeling from lost jobs: “That’s money they can use to feed their families, take care of their kids, get medical care.”

The announcement comes after a tough year and a half for Laborers, especially in New York City, an early epicenter of the pandemic.

As of June, New York City had 488,000 fewer jobs than in February 2020, before the pandemic started, according to a report from the New School’s Center for New York City Affairs.

The city’s unemployment rates are highest among Black and Hispanic Workers.

In the second quarter of the current fiscal year, unemployment was 12.4% for Hispanics, 12% for Blacks, 9.4% for Whites and 10.7% for Asian and “other” Workers, the center found.

To Directly Access This Labor News Story, Go To: www.nydailynews.com/news/politics/new-york-elections-government/ny-stolen-wages-scott-stringer-20210830-7pb7uc6u2vexpetfenwazve6fm-story.html