CWA Local 1122 President John Mudie Officially âSashedâ As The Grand Marshal Of The 2021 Buffalo Labor Day Parade, Which Will Honor Those Essential Workers âWho Continue To Make Our Economy Goâ During The COVID-19 Pandemic 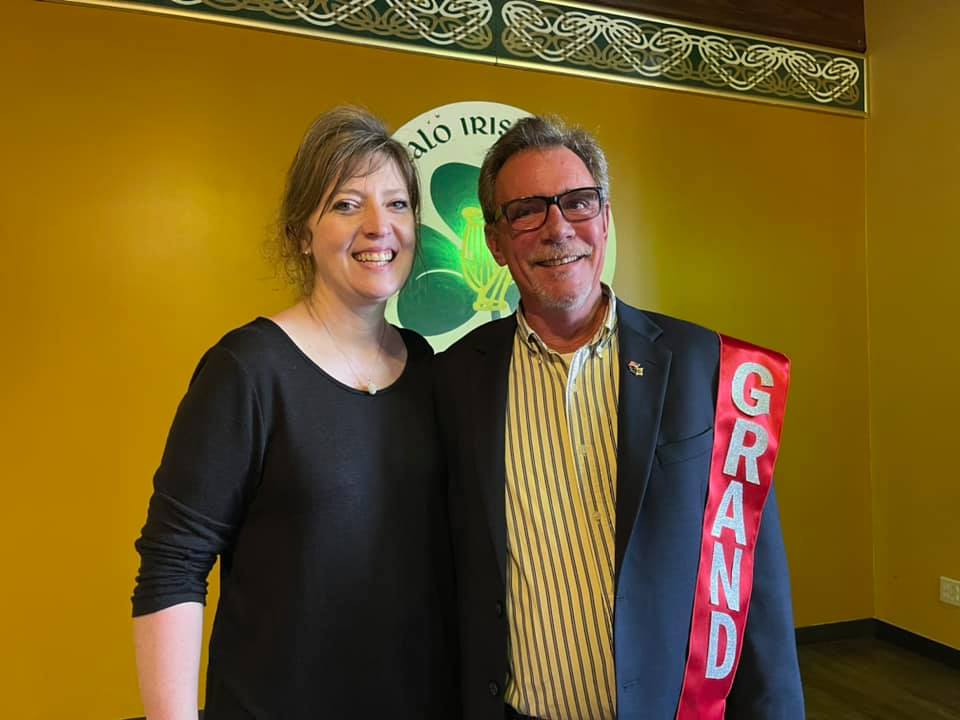 (BUFFALO, NEW YORK) – “He ‘epitomizes’ (what) a Labor Leader (should be),” New York State Senator Tim Kennedy said.  “His honesty, his awareness, his guidance and knowledge (of the Labor Movement) is ‘off the charts,’” Buffalo AFL-CIO Central Labor Council President Denise Abbott said.  “Such a ‘phenomenal’ choice,” Buffalo Mayor Byron Brown added.

The accolades and warm announcement that former Buffalo AFL-CIO Labor Council President John Mudie - the current President of the nearly 1,400-Member Communications Workers of America (CWA) Local 1122, will serve as the Grand Marshal of the 2021 Buffalo Labor Day Parade made a big impact on Mudie himself as he became a bit emotional at times, but in typical Mudie fashion, he instead chose instead to focus a spotlight on those who will be honored at the parade that will be held on Monday, September 6th: A variety of Essential Workers who have and continue to sacrifice their own health and lives to make sure the economy keeps going during the COVID-19 Pandemic.

“It’s ‘nice’ to be recognized, ‘but I could have not done this (what he has accomplished as Buffalo AFL-CIO President and as CWA Local 1122 President over the years) alone,’” said Mudie – who was officially sashed last week as the parade’s Grand Marshal.

“I’m ‘humbled to lead such a prestigious event and I am so looking forward to leading off the parade with our Essential’ Workers - from our Health Caregivers to those who drove trucks with items that people needed to the Workers who stocked the shelves in supermarkets.  We at Local 1122 had six contract extensions (over the course of the last year or so) for our Members ‘who didn’t know what they were exactly walking into,” Mudie said.

Buffalo Council President Abbott, a fellow CWA Member who is with Local 1168, praised Mudie’s “honesty, awareness, guidance and knowledge” for the Labor Movement, which she further described as “off the charts.”

“He’s ‘walked on so many’ pickets lines, he’s ‘been involved in so many’ political actions, ‘he’s done so much’ for the Labor Movement – from the Workers’ Memorial (at Chestnut Ridge Park in Orchard Park), ‘which has to be one of the most memorable’ Workers’ Memorials around,’ which is ‘very special’ to John, to a community effort to build a new porch for an elderly woman (who owns a dilapidated home on Buffalo’s East Side).  He ‘deserves’ (this honor) and ‘I am so proud that he will serve as our Grand Marshal.’” 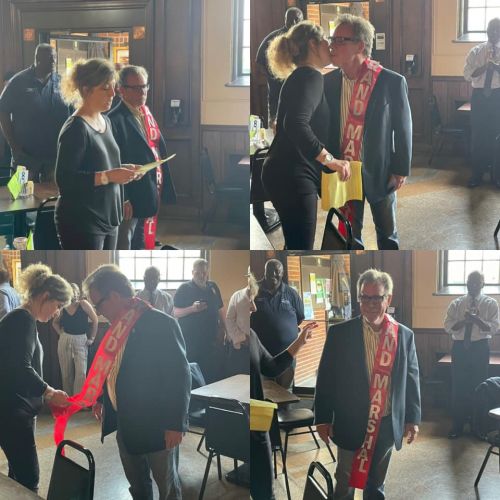 A couple of weeks earlier Abbott told WNYLaborToday.com: “John’s been ‘essential’ (himself).  His leadership was ‘essential’ during the pandemic, ‘during which he worked to protect the workplaces where his essential’ Members worked - including Health Care Workers, ‘and made sure their rights on the job were protected too.’”

“In addition, under his leadership at the Buffalo Labor Council, John ‘brought together more’ Unions ‘who got more involved while stressing the importance of what the Council does.’  ‘He also incorporated Labor more into our community.’  ‘This (the honor of being named Grand Marshal of the Labor Day Parade) is for all the good work he’s done,’” Abbott added.

Mudie began his acceptance speech with a remembrance of the first Labor Day Parade that was held in New York City back in 1882 which “recognized that labor contributes to the ‘real’ wealth of the United States” and that the Labor Movement is “inclusive, not exclusive” when it comes to welcoming in all Workers of Color and ethnic backgrounds.

He even cracked a joke about how he became more involved in his CWA Local back in 1984 when he was elected as a Union Steward - “while on vacation.”

“And so it began,” laughed Mudie, who also took the time to thank his family, loved ones and friends for being there along the way during his illustrious tenure in Organized Labor.

He also went on to recall several victorious Worker strikes and actions - most notably the CWA’s 2016 Verizon Strike that went on for 45 days and culminated here in Buffalo in a massive march of 1,500 Workers who started Downtown and walked to a Verizon Center on Elmwood Avenue more than a half-hour away.

“We won,” he said. “(Unions and their Members) ‘can be an employer’s biggest asset or they can be demonized’ (if they do not treat them fairly).”

He also fondly recalled Western New York Labor’s effort to donate, collect and deliver 22 tons of bottled water to those in need in Flint, Michigan a few years back and that porch built on Mulberry Street by a contingent of area Union Members, including a number of Members from the individual Unions of the Buffalo Building & Construction Trades Council.

State Senator Kennedy, one of a number of elected officials who has worked closely with Organized Labor over the years and who was in attendance at the Buffalo Irish Center for Mudie’s sashing event, said: “When ‘anyone needed help, John was there.’  He ‘epitomizes’ (what a Labor Leader should be) - he is a friend.”

Buffalo Mayor Byron Brown was also there and said of Mudie: “This is such a ‘phenomenal” choice (for the parade’s Grand Marshal).  John is a ‘Labor Leader’s Labor Leader.’  He ‘always has your back.’”

A large contingent of fellow CWAers were also on hand to honor Mudie, who took the time to pose for a team photo after the event was over (pictured below). 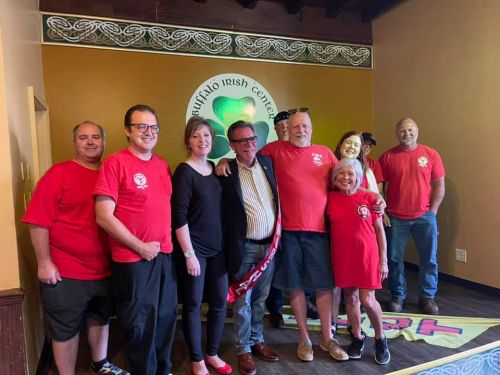 Meanwhile, after a one-year COVID pause and a car caravan in 2020 that replaced the annual event, the Buffalo Labor Day Parade will begin to assemble at 11 a.m., with a 12 noon start.

However, instead of its usual start in South Buffalo in Abbott Road - due to road construction, the parade will kick off in the City of Lackawanna on Dorrance Avenue before making its way to McKinley Parkway and then on to Red Jacket Parkway, where the event will end with a post-parade picnic (sponsored by Highmark Western New York, the former Blue Cross Blue Shield of Western New York) at Cazenovia Park - outside the Peter Crotty Casino.

As many as 2,000 marchers from the Western New York Labor Movement’s individual Private and Public Sectors – as well as from the Building Trades, are anticipated to take part, with a number of Friends of Labor and Elected Officials marching too.

Mudie also made it a point to single out Highmark Western New York for its continued support of the Buffalo Labor Day Parade:  “I would like to give them a big ‘Thank You!”