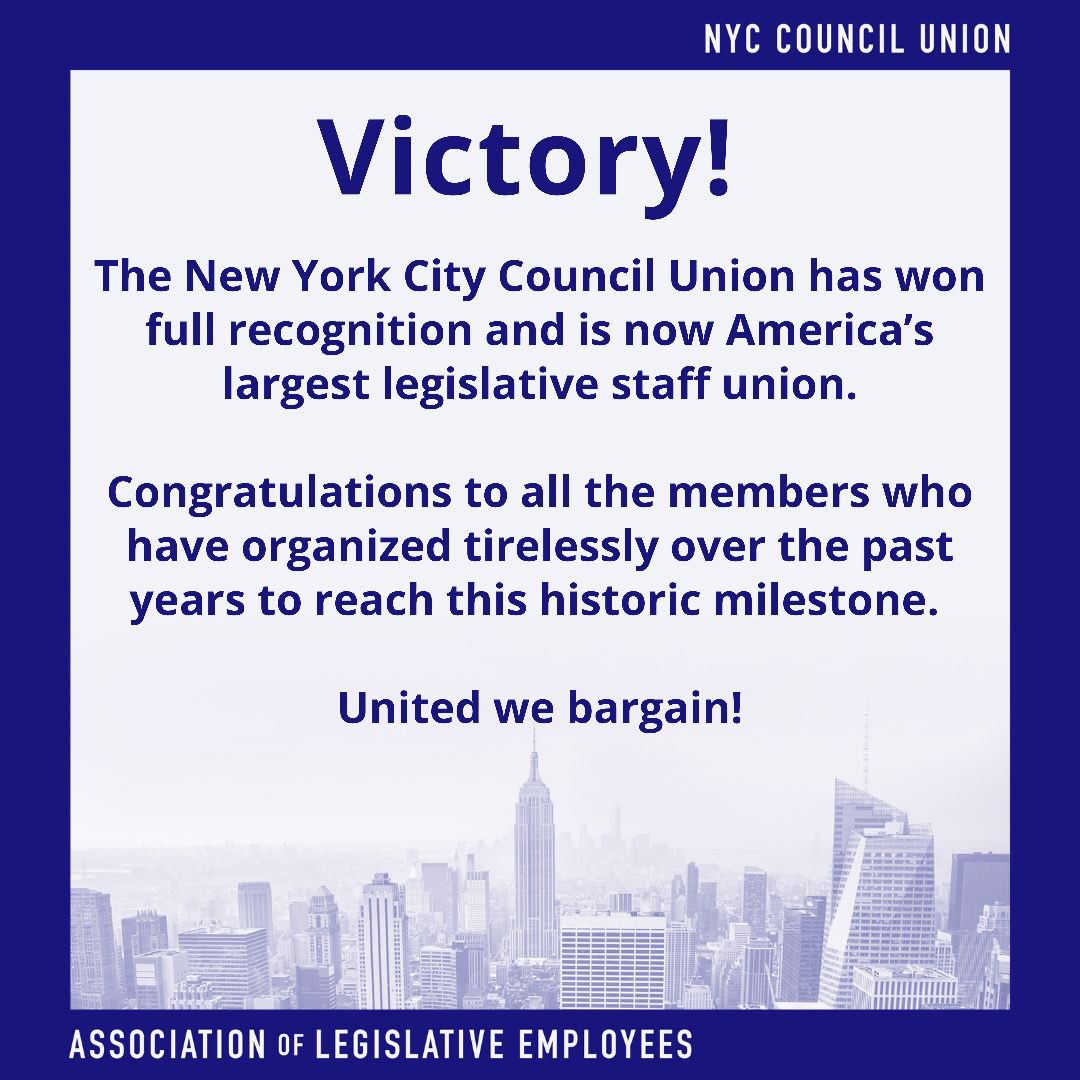 (NEW YORK CITY) - The Labor Union representing more than 350 New York City Council Aides has officially been approved by the city, paving the way for the Association of Legislative Employees (ALE) - which is now the country's largest Legislative Staff Union, to collectively bargain with the City Council.

That’s a capstone on a nearly two-year-long public process that was delayed by the ongoing COVID-19 Pandemic.

“This is about pay equity, it is about consistent standards, it is about fair grievance procedures - and it’s really about lifting up the professional standards of the City Council so we can do the best we can for the people of New York,” said Daniel Kroop, a Member of the ALE Core Committee and a Senior Legislative Finance Analyst for the City Council.

“We’re really excited to take this to the next level, now that the long recognition struggle is complete.  We’ve been victorious.  It’s a real testament to the strength of the Staff of the City Council,” Kroop said.

Talk of Unionization has percolated among City Council Staff for more than a decade, but the recent push became public in November 2019 when Member Staffers, who work for individual Council Members rather than the Council as a whole, promoted an analysis of their low pay and long hours.

They then launched a Union Card Check Campaign, and after securing a majority of support, called on City Council Speaker Corey Johnson to voluntarily recognize the Union in January of 2020.

Johnson publicly supported the effort, but legal concerns and the Coronavirus Pandemic slowed the process.

When the Union seemed close to formal recognition last Summer, ALE had to launch a second Union Card Check, since the previously signed Union Recognition Cards had expired after seven months.

In December, the Unionization effort was approved to represent 23 Financial Analysts who work as part of the Council’s Central Staff, but the much larger effort to Unionize Member Staff continued.

In April 2021, the Council quietly passed a resolution that would allow the speaker of the Council to collectively bargain with Staff of the 50 other individual Members.

And on August 13th, the New York City Office of Collective Bargaining officially certified ALE’s petition for voluntary recognition of representing Council Member Aides, exploding the size of the union to nearly 400 Members.

“This is the history-making moment.  Because after many years of Staff organizing efforts in the City Council, the Council Member Aides are joining folks like myself in the Council finance division as Members of ALE,” Kroop said. “With (377) people currently in jobs represented by ALE, we are now America’s largest Union of Legislative Staff.”

There’s been a growing Unionization Movement among elected officials’ Staff, both locally and across the U.S.

Workers in the New York City Public Advocate’s Office formed a Union and were recognized by the city earlier this year.

To Continue Reading This Labor News Report, Go To: www.cityandstateny.com/politics/2021/08/new-york-city-council-aides-are-officially-unionized-after-21-month-campaign/184742/