More Coffee Worker Organizing News - In The Buffalo Area, 50 Starbucks Workers Are Trying To Form A Union After A 'Perfect Storm' Of âUnderstaffing & Unhappyâ Customers 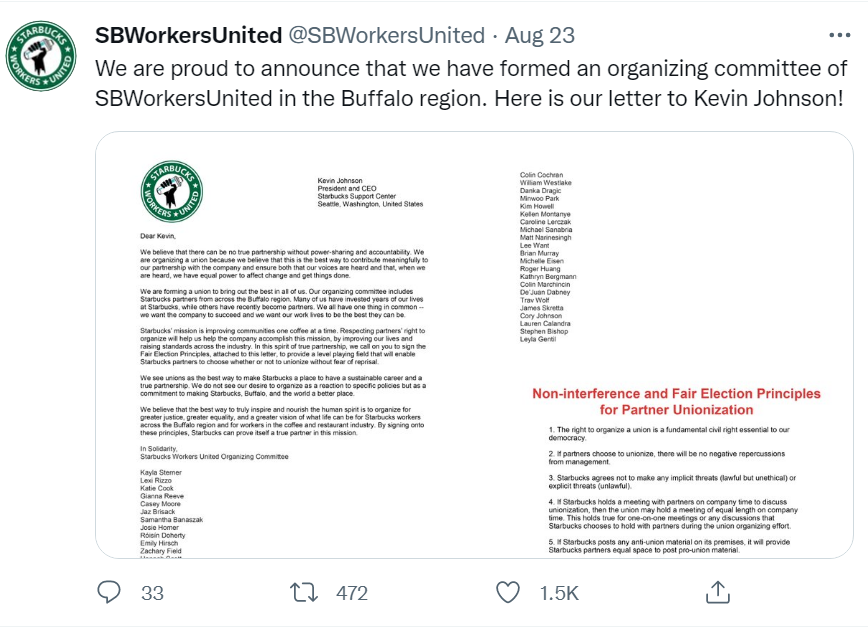 (BUFFALO, NEW YORK) - Fifty Starbucks Workers in the Buffalo area are trying to form a Union, which would be a first for the coffee chain.

They formed an Organizing Committee under the name Starbucks Workers United and released a public letter to Starbucks CEO Kevin Johnson on Twitter which was picked up by local news outlets.

"We are forming a Union to bring out the best in all of us.  Many of us have invested years of our lives in Starbucks, while others have recently become partners.  We all have one thing in common - we want the company to succeed and we want our work lives to be the best they can be," the letter reads.

Starbuck told Insider it holds the position that Baristas don't need a Union due to its pro-Worker policies.

While there had always been whisperings about organizing a Union, conditions in the last few months reached a "perfect storm," Alexis Rizzo, a Shift Supervisor who’s worked at Starbucks for six years, told Insider.

The Coronavirus Pandemic and consistent understaffing at work were enough to finally push for something concrete, she said.

Starbucks stores, like most restaurants across the country, are facing a labor shortage with difficulty attracting and retaining Workers.

Some restaurants are so understaffed that they've been forced to close without any Workers, while others have turned to incentives like bonuses or free perks for interviewing.