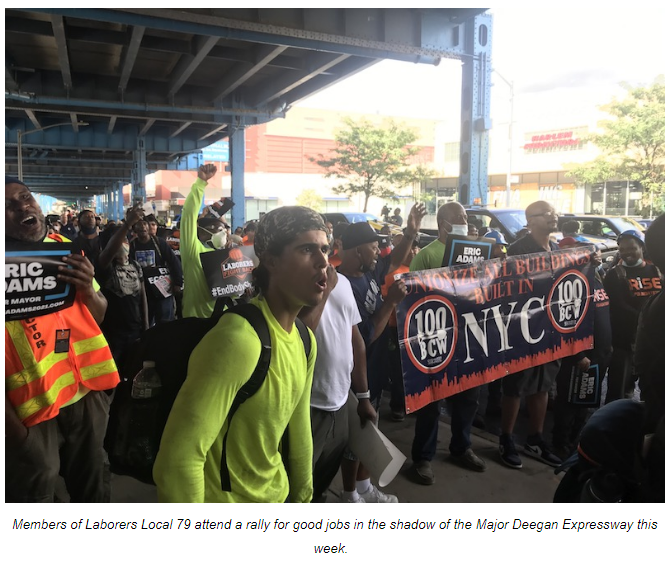 “If you want to take the cold steel of a gun out of someone’s hand, then put the steel of a hammer in their hand, and let them be on the job site,” Adams said. “Good Middle Class jobs, that’s the best crime-fighting tool you can ever get.”

The green-painted wood fence behind them, on Exterior Street just north of 149th Street and the bridge to 145th Street in Manhattan, marked the site of the future Universal Hip-Hop Museum and the Bronx Point development.

The museum is scheduled to open in 2024 and the development will include 542 units of affordable housing.

All of it, Adams told the crowd, will be built Union, with at least 50% of the Workers hired from nearby neighborhoods, 20% of formerly incarcerated, and 10% women.

“We gotta stop shootin’ and start bootin’,” declared John Simmons, after describing how he’d been told while he was in prison that his son had been shot to death. “When we put on our boots to go to work, we put down the guns.  Good jobs change thought processes.”

He said that when he worked for a “body shop” - an employment agency that specializes in hiring recently released prisoners for Non-Union construction jobs at minimum wage or close to it - “every day, I thought about going back to jail.”

Gerald Lisbon said he’d made $15 an hour working for a body shop, helping unload deliveries - “tubs, pipes, toilets” - but now has a Union job on an affordable-housing development being built by L+M Development Partners in East Harlem, a five-minute walk from his home.

L+M Development, one of the city’s main builders of affordable housing, has historically used Non-Union labor, but is working with Local 79 on the Bronx Point development, which broke ground in May.

The 542 apartments in its first phase are slated for households and individuals earning between 30% to 120% of the Metropolitan Area median income, as well as for formerly homeless people.

“This is the way of the future.  This is how we’re going to build affordable housing,” L+M Development CEO Ron Moelis told the rally. “We want people working on these jobs to be able to afford to live in these jobs.”

To Continue Reading This Labor News Report, Go To: www.laborpress.org/laborers-bet-eric-adams-will-be-big-on-local-hiring/