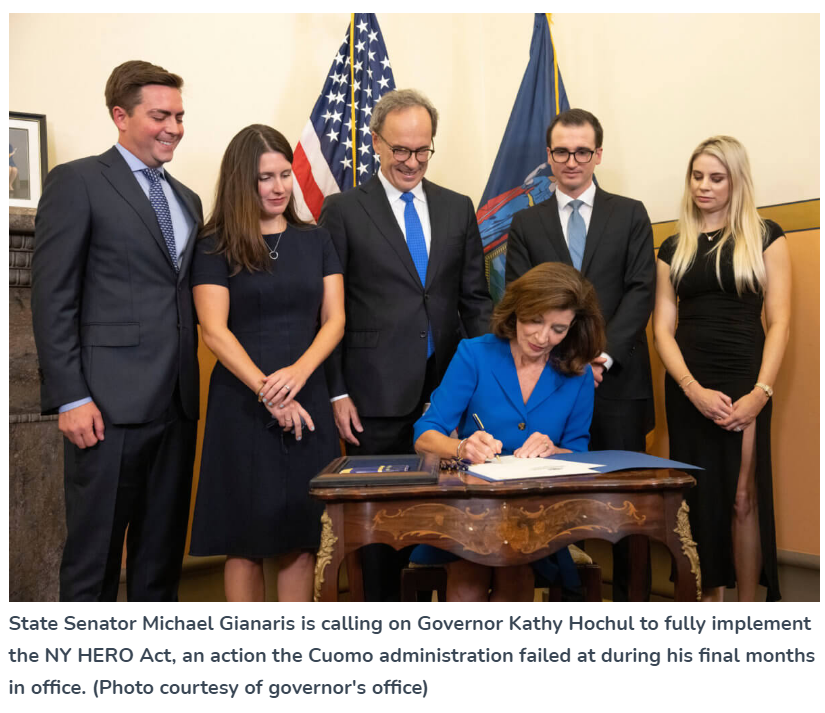 The landmark Bill, passed earlier this year by the Legislature and signed into law by former Governor Andrew Cuomo, requires the DOH to declare a disease, like COVID-19, “a highly contagious, communicable disease that presents a serious risk of harm to public health” before the law’s protections can be implemented.

To date, the State’s Health Agency has not done so, State Senator Michael Gianaris said.

“While the outgoing administration has been distracted, New York’s challenges have not gone away.  The delay in HERO Act implementation has resulted in preventable danger of Coronavirus spread in the workplace.  The new administration needs to act quickly.  Too many Workers already sacrificed their health for our community’s benefit.  The New York HERO Act recognizes their efforts by giving Workers the tools to protect themselves while on the job,” he said.

Also under the HERO Act, Workers would also be given a direct role in monitoring and reporting violations through Workplace Health and Safety Committees and Employees would be protected from retaliation for utilizing their rights under the law.

Bronx Assemblywoman Karines Reyes, who carried the Bill in the lower chamber, said the Cuomo Administration largely failed to implement laws passed by the Legislature in its final months: “Governor Hochul must immediately take action and ensure the NY HERO Act is enforced by the Department of Health.  With the delta variant on the rise in our state, we must have protection plans for Employees in place as soon as possible.”

A spokesperson from the DOH said the agency is “actively working on a designation for implementation of the NY HERO Act.”

The legislation is supported by more than 100 Labor Unions and community and safety organizations, including the New York State AFL-CIO.

The Essential Workers Coalition joined Gianaris and Reyes in calling on Hochul to push the DOH to take action.

“As cases surge throughout the state due to the delta variant, it is painfully obvious that COVID-19 is still highly contagious and there is no evidence that it has ceased to be a public health risk,” the Coalition wrote. “Test positivity rates are at their highest point since February - when vaccines were not widely available and a state of emergency was still in place.  Already this month, nearly 200 New Yorkers have died from COVID-19.  With school re-openings around the corner, it’s crucial the common sense basic safety standards promised under the NY HERO Act be implemented in order to avoid unnecessary death and another statewide shutdown.”

To Directly Access This Labor News Report, Go To: https://qns.com/2021/08/queens-senator-calls-on-hochul-administration-to-fully-implement-ny-hero-act-as-delta-variant-poses-threat-in-workplaces/