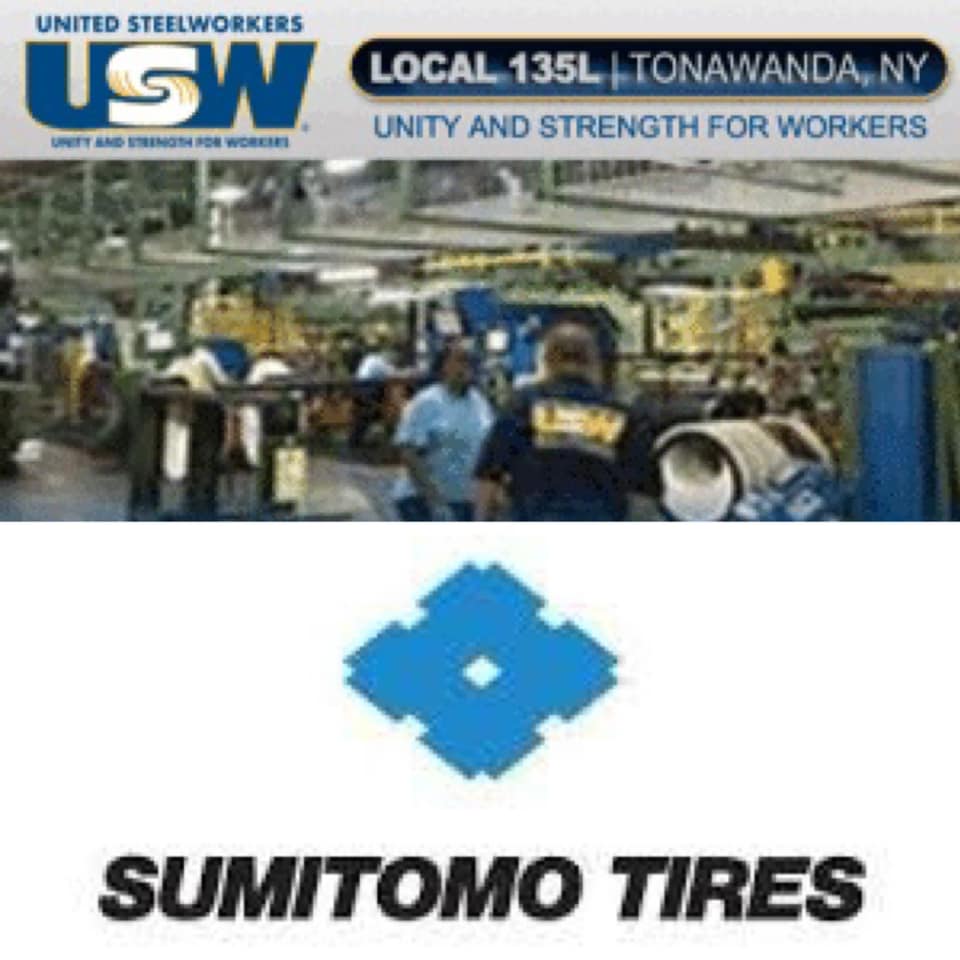 (TONAWANDA, NEW YORK) – A newly-ratified contract at Sumitomo Rubber USA’s Tonawanda tire-making plant not only benefits the more than 1,000 United Steelworkers (USW) Local 135L-represented Workers employed there, it “guarantees” a $122 million expansion, which - in the process, will also benefit the local community and Western New York Region.

USW Local 135L President Tom O’Shei, whose Local represents 1,060 Members at the plant, told WNYLaborToday.com on Sunday (August 22nd) that the Union’s Membership ratified the agreement by a final tally of 464-to-340 late last week.

With an expiration date of July 27th, 2022 on the old contract, USW Representatives tell Your On-Line Labor Newspaper they “chose not to wait” and got out in front of negotiations almost a year earlier in order to strike a new deal that runs from now - August 2021, to December 31st, 2025.

In the process, the new contract “guarantees” Sumitomo will move forward on an already announced $122 expansion at its tire-making plant on Sheridan Drive along the I-190, just outside Buffalo, O’Shei and USW District 4 Sub-District Director Jim Briggs told WNYLaborToday.com.

The reported 60,000-square-foot expansion includes technology upgrades that would boost production capacity from 9,000 Falken-branded Passenger Vehicle and Truck Tires and Dunlop Motorcycle Tires to about 18,000 tires per day.

The expansion project is anticipated to start in 2022 and wind up sometime in 2023.

“We now have written letters signed by (Sumitomo’s) CEO ‘guaranteeing the expansion upon ratification’ (of the new contract),” Briggs tells WNYLaborToday.com.  “This is ‘huge’ for the people who work at the plant because it ‘preserves’ jobs ‘and it is huge for the community.’  ‘It is also huge for the plant’s Retirees,’ because ($3.5 million) will be placed in the Volunteer Employee Benefits Trust so these Retirees get their retirement.”

“And, ‘it increases our chance to be a more competitive plant with the investment being made (by Sumitomo) because we will build more tires,’ O’Shei added.

Highlights of the new agreement include: A $1,200 signing bonus; No changes in the Workers’ Health Care Plan, most notably no increased costs for co-pays or premiums, for example; A roughly Cost of Living/66 cents per hour raise (“When I started in 1990 I made ($17.75) an hour, now I’m close to ($33) an hour.  Our (hourly pay rates) ‘are the highest of any’ tire plant (in the U.S.).  ‘No one makes more,” O’Shei said); and a number of additional training programs.

Due to the ongoing Coronavirus Pandemic and the “uncertainty” of what will come in the future due to the Delta Variant and how the virus continues to impact Essential Workers, USW Leadership decided to get out in front of negotiations on a new contract with a year still left on the old deal.

However, a major negotiating issue involved how a number of offered days off - ranging from FMLA (Family Medical Leave Act) to New York State Paid Family Leave to several additional and offered sick days off, was negatively impacting production at the Tonawanda Plant.

With so many Workers off at different times, production lines were slowed, which the company was understandably unhappy about.

Added Briggs: “We had a ‘veteran group’ of USW Officers on the Bargaining Committee in the plant ‘who had the ability to recognize the need to address these issues.’  Mandatory overtime had become an issue with our Members, ‘who wanted to go home, but couldn’t.’  ‘We just couldn’t wait’ (for the old contract to expire).  So we put together a package of proposals and (in the end) overtime ‘was capped’ at forty hours and that new hires at the plant would receive training of (75%) in their first year and (100%) in their second.  And, our Members will use those days they have coming ‘for a sickness or a sickness in their families.’  ‘In the end, we worked to create a platform that when our Members need them (days off), they will have them.’”

Said O’Shei: “Now, our Members ‘will be able to cover an entire shift and not be considered utility people’ (jumping from one job to another at different rates of pay).  In the past, we would have people moved off their job.  ‘Now, they will be paid the highest rate for the job they are working, regardless of what it is.’”

“We ‘needed to do things a little differently to survive or the plant wouldn’t be making tires and we were not going to be around.’  Most of these tire-making plants are down South, ‘so we’re fortunate.’  ‘We recognize that if the company is not profitable, we will not be here.’  And, as I said, ‘no one makes more.’  ‘We are the highest paid’ tire-making Workers,” he added.