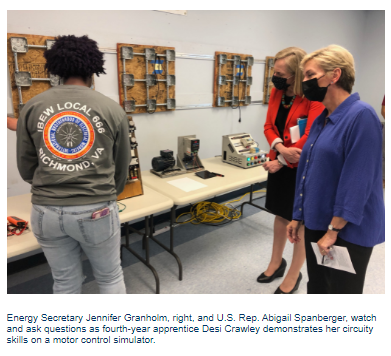 (RICHMOND, VIRGINIA) - U.S. Energy Secretary Jennifer Granholm left no doubt how impressed she was as she wrapped up a visit to International Brotherhood of Electrical Workers (IBEW) Local 666’s Joint Apprenticeship Training Center (JATC) in Richmond, Virginia as part of the White House agenda for infrastructure and good, Union Jobs.

“This work will be done by IBEW Members,” an emphatic Granholm said to a round of applause outside the classrooms dedicated to the Electrical Vehicle Infrastructure Training Program - which is vital to the Biden Administration’s call for a nationwide network of charging stations.

And it wasn’t a throwaway line.

The IBEW hosts were sure of it after an hour of rapt attention from the Secretary and Richmond-area U.S. Congresswoman Abigail Spanberger.

“There was lots of eye contact, they were present in the moment and they were genuinely there to learn more,” said fourth-year Apprentice Desi Crawley, who by all accounts wowed the VIPs with her circuitry skills on a motor control simulator.

The visit marked the latest road trip to an IBEW Local for Cabinet Members, including Vice President Kamala Harris - and recently President Bid himself, to advance their ambitious Build Back Better Plan.

Just days earlier, after a months-long battle, a $1 trillion spending package for roads, transit, the electrical grid, the Electric Vehicles Initiative (EVI) and more passed its first major legislative hurdle with a 69-50 vote in the U.S. Senate.

Granholm’s zeal for more progress was evident in a quick video she and Spanberger recorded after the tour.

“The Build Back Better agenda!,” the Secretary exclaimed. “Two million jobs per year for the next decade!  We want them to be good-paying Union jobs.  This is a great example of people getting trained (to put) people to work.”

IBEW Local 666 Business Manager Charles Skelly said Granholm was every bit as warm and personable as he’d been told - so much so that pre-arranged questions went out the window during a roundtable with the Local 666 contingent, two Officers from IBEW Utility Local 50 in Richmond, and the management chair of the joint IBEW-NECA (National Electrical Contractors Association) Training Center.

“The Secretary made it a very loose, open conversation and asked very good questions," Skelly said.

The answers gave her a sense of a union committed not only to new jobs and state-of-the-art training, but also to diversity and equality.

IBEW/EVI Instructor Lee Boehm and Union Organizer William Merriman, a JATC Executive Board Member, came away with the same good vibes as Skelly:

“Their body language, their personalities, their inquisitiveness, it all felt sincere.  Their message was very much, ‘What can we do for you?,’” Boehm said.

To Continue Reading This Apprenticeship And Training Labor News Story, Go To: www.ibew.org/media-center/Articles/21Daily/2108/210817_Energy