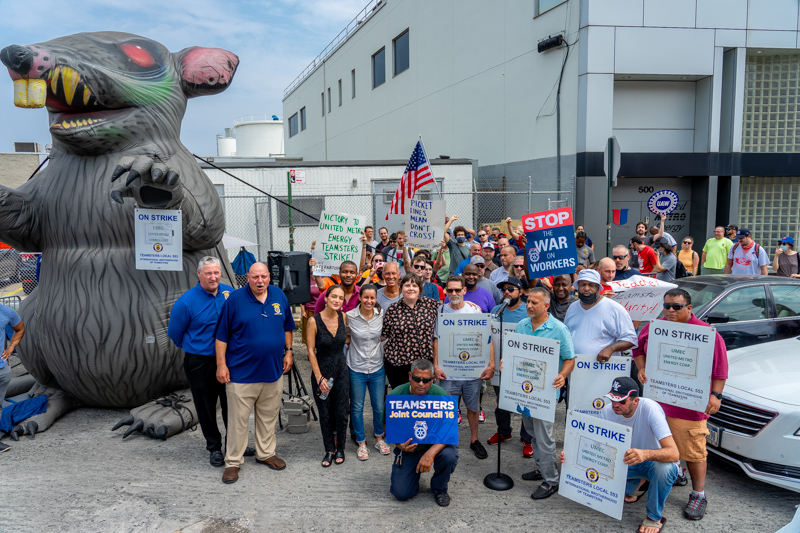 The Essential Workers, who are represented by Local 553, supplied New York with heating oil, diesel, and gasoline through the Coronavirus Pandemic - but are paid as much as 50% less than Workers doing the same job at other companies and receive inferior health and retirement benefits.

The Workers went out on strike on April 19th after the company’s owner, billionaire John Catsimatidis, refused to agree to a fair Union Contract - despite two years of negotiations.

“United Metro Energy’s exploitation of Essential Workers is shameful.” State Senator Brisport said. “Many of these Workers went out every day in the height of the pandemic to keep our city running.  Yet, UMEC continues to deny them a contract with a reasonable wage for their labor - instead, extra profits are going to its billionaire owner, John Catsimatidis.”

State Senator Julia Salazar said: “The Working People at United Metro Energy make half of what their Union comrades make just so John Catsimatidis can make another quick buck.  The Union Busting Tactics of this company and its billionaire owner are shameful.  We’re here to say ‘enough is enough and it’s time to give these brave Working People the fair contract they are owed.’”

Assembly Member Emily Gallagher said: “For John Catsimatidis this Strike is about ego, but for the Working People at United Energy Metro, this is about dignity.  I’m here because Essential Workers deserve more than praise.  They deserve a fair Union Contract, good pay, and benefits they can be proud of.  These Working Men and Women are owed this and so much more, but John Catsimatidis has instead decided to threaten their health care unless they work for sub-par wages.  United Energy Metro can end this Strike today - come to the table and negotiate in good faith.”

Local 553 has filed charges at the National Labor Relations Board (NLRB) against United Metro Energy Corporation, owned by Catsimatidis, alleging that the company illegally fired, threatened and retaliated against striking Essential Workers at the company’s Brooklyn oil terminal.

“A year ago, Essential Workers were called ‘heroes.’  Now that they want a raise, they are called ‘replaceable,’” Demos Demopoulos, who serves as Secretary-Treasurer of Teamsters Local 553, said. “John Catsimatidis is mistreating the Workers who got us through the pandemic.  These Workers have the support of their elected representatives, the local community and (120,000) Teamsters across New York City.  We are united and we are going to win this Strike.”

Andre Soleyn, an Oil Terminal Operator at United Metro Energy, said: “All I want is to be able to provide for my daughters and my Co-Workers ‘want the same for their families.’  We are on Strike because we refuse to be paid far less than other workers who do the same job in New York.”

Ivan Areizaga, An Oil Terminal Operator at United Metro Energy, said: “We are making so much money for this company and its billionaire owner, why can’t they pay us fairly?  I’m striking for a better future for my family.”

To Directly Access This Labor News Report, Go To: http://teamsters.nyc/2021/08/10/brooklyn-representatives-rally-striking-teamsters/