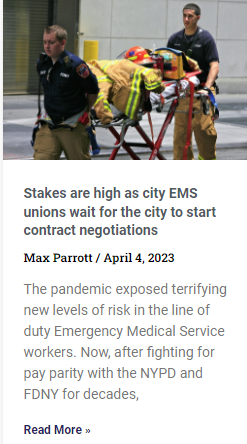 According to the tentative 49-month pact, which is retroactive to June 29th, 2018, the city would expand the Mental Health Crisis Response Pilot Program that’s been operating just in Northern Manhattan to all five boroughs.

FDNY EMS participants would see a 6% differential for that work.

The starting salary of an FDNY EMT “will remain low” according to American Federation of State, County & Municipal Employees (AFSCME) District Council 37 Local 2507, which represents that title, but would increase from $35,254 to $39,386, or just $16.95 an hour.

The agreement calls for those covered by the pact to work 2,088 hours a year, 131 more than most Unit Employees that are now on the job, according to the city.

While not the full parity with Firefighters that the Unions have been pressing for, Union Officials described the pact, which would cover more than 4,500 City Workers, as a “landmark” deal.

“This is an important day for our First Responders in Locals 2507 and 3621, who are getting the big raises they deserve,” District Council 37 Executive Director Henry Garrido said. “These Members were on the frontlines for COVID-19, helping New Yorkers in need.  Our city could not have gotten through without them and we are so grateful for their service.”

FDNY EMS has had a significant retention crisis with 50% of EMTs quitting after just three years and 70% moving on to other careers by their fifth year.

“Despite the applause and the accolades, New York City’s Medical First Responders, our city’s ‘Street Doctors’ have had to fight and claw for every ounce of recognition, just to be considered by the city an equal to our great Police and Firefighters.” said Oren Barzilay, President of EMS Local 2507, which represents FDNY EMTs, Paramedics and Fire Inspectors.

Vincent Variale, President of DC 37 Local 3621, which represents FDNY EMS Officers, said the contract addresses several issues that have impacted his Members for years: “While it does not provide parity with the other uniform services, it does provide financial relief for our Members, the ‘heroes’ of New York City.”

To Continue Reading This Labor News Report, Go To: https://thechiefleader.com/news/open_articles/ems-unions-city-reach-agreement-on-4--year-contract-free-article/article_02f5791a-f703-11eb-bd8c-a3896a5d3fdc.html