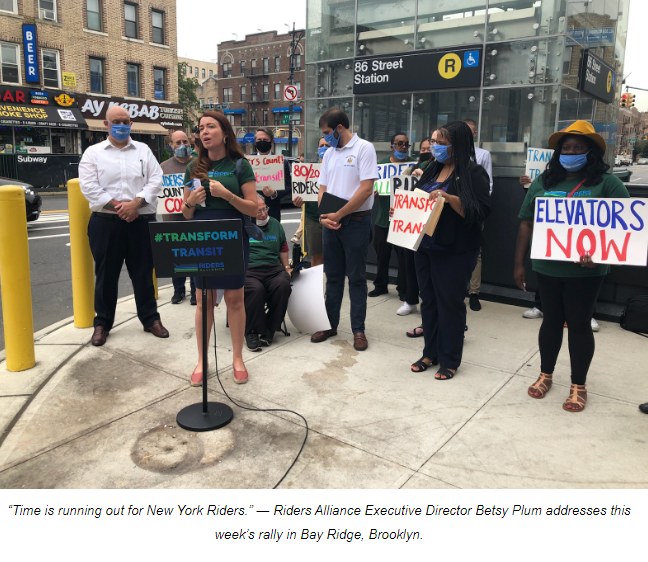 At issue is the Federal aid for more trains and buses that is set to expire in two years.

Without those special pandemic funds, the MTA will have to slash services.

Advocates hoping to avert that disaster are rallying behind H.R.3744 as Federal Transportation and Infrastructure Bills are negotiated.

“Transit is the lifeline of New York City, and a significant driver of economic growth in our communities,” Senator Andrew Gounardes said in Bay Ridge. “If we don’t act now, the MTA will face unprecedented fiscal and economic challenges.  To avoid fare hikes, service cuts and job losses, we need the Federal Government to take action and pass the Stronger Communities Through Better Transit Act to bring home ($3 billion) for high quality and dependable buses, trains and para-transit.  It’s time we rescue the MTA from the financial toll of the pandemic.”

Riders Alliance Executive Director Betsy Plum said: “Time is running out for New York riders.  Senators Schumer and Gillibrand and Representative Malliotakis need to deliver for Bay Ridge commuters.  New Yorkers can’t afford steep cuts to bus and subway lines just as we’re getting back on our feet after the pandemic.  Instead of austerity, we need our Congressional leaders to recognize public transit’s central role in our communities and invest in more and better service.”

Once pandemic aid expires in two years, the MTA will face a growing, multi-billion-dollar budget gap.

Last Summer, as Congress debated a second round of pandemic aid, MTA Officials outlined doomsday service cuts of 40%-to-50% that would have saved about $1 billion.

With ridership projected to get back only to 80% by 2024, riders need new revenue to fill the gap, keep fares down and save frequent bus and train service.

The MTA, by far the Nation’s largest transit system, could expect to receive $3 billion annually, which would likely be enough to fill its budget gap and take fare hikes, service cuts and job losses off the table - and, instead, provide new investments in better service for the communities that need it most.

To Directly Access This Labor News Story, Go To: www.laborpress.org/next-stop-austerity-cuts-for-nyc-transit-riders/