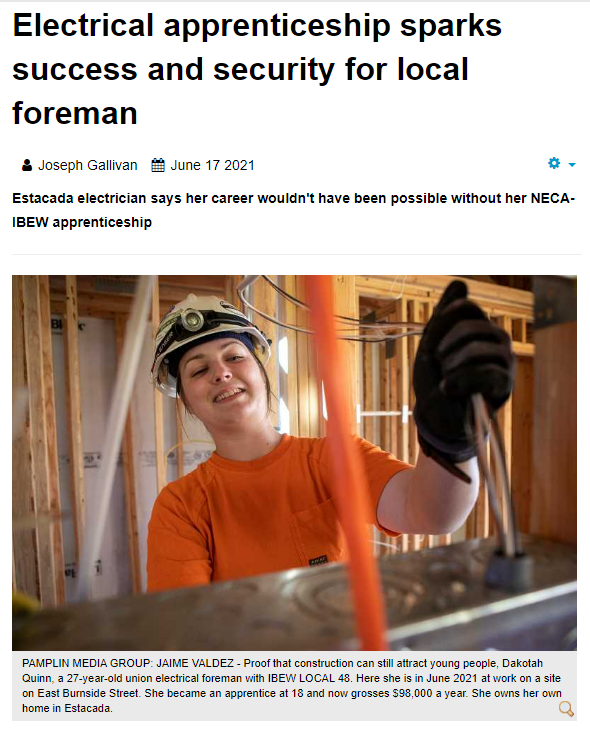 The 27-year-old Union Electrician lives in Estacada and said her field has opened up a lot of doors for her: financial security, steady work and upward mobility.

As a young professional, Quinn is in high demand.

The need for Construction Workers and Electricians has skyrocketed in recent years as older Workers retire, leaving a shortage of skilled Workers in the Trades.

"It's so hard to find people," she said. "Sometimes you can find people, but they're not the people you want.  I'm not pooh-poohing college, but there's other options.  If you're unsure of what you want to do, there's not a lot to lose."

Growing up in Beavercreek, Quinn said she had one advantage over other kids her age: her father was a Concrete Worker and a Commercial Fisherman.

He taught her how to weld, use a hammer and "cut things up," as she puts it.

Her mother was a Low Voltage Electrician with Bonneville Power.

By the time she was 20, Quinn could walk onto a site and do anything from finishing drywall to building cabinets, but she wasn't always sure what career she wanted.

"In high school I grew up in the country," she told The Business Tribune. "I was really into horses, but I didn't really quite know what I wanted to do.  I knew I didn't want to go into debt to go to college.  I wanted to be financially stable."

There was a lot of pressure to go to college, she said: "It was thought the only route to success was to take on ($100,000) of debt and at eighteen that was just not something I felt I could do."

Quinn heard about an Electrical Apprenticeship through a friend and was impressed that she could earn a decent hourly wage while learning the Trade.

"It's like ($40,000) ‘that they invest in you’ and then eventually you pay it back through your hourly wage when you journey out," she said. "You don't have to pay anything up-front.  So that was a big reason why it appealed to me."

Quinn took on the four-year Apprenticeship with the National Electrical Contractors Association (NECA) and International Brotherhood of Electrical Workers (IBEW).

Her mother's job as an Electrician helped her prepare for the field, she said: "I guess subconsciously I was never afraid of (electrical work).  I hear a lot of times from women especially, 'Oh, I can't do that, that's not for me.'  And I just never thought that.  I wish that more women had more faith in themselves.  If there's one thing I wish I could squash it is people not having faith in themselves to do construction.  There's good pay, good retirement and good medical."

Every three months there were breaks from school, but she worked full time throughout.

To Continue Reading This Apprenticeship And Training Labor News Story, Go To: https://pamplinmedia.com/but/239-news/512463-409597-electrical-apprenticeship-sparks-success-and-security-for-local-foreman