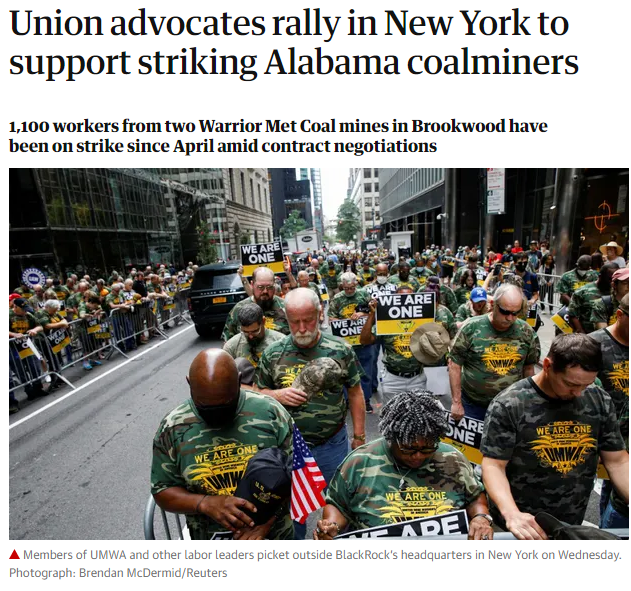 (NEW YORK CITY) - Coal Miners and Union Advocates from across the country rallied in New York City on Wednesday (July 28th) in support of Alabama Miners who are four months into a Strike against their employer, Warrior Met Coal.

Dressed in camouflage T-shirts with the slogan: “We Are Everywhere,” Members of the United Mine Workers Association (UMWA) gathered in midtown Manhattan in front of the headquarters of BlackRock, a hedge fund that’s Warrior Met Coal’s largest investor.

More than 100 protesters chanted: “No contract, no coal!” and “Warrior Met Coal ain’t got no soul!,” as trucks and cars driving between the barricades enclosing the protesters honked in support.

Over 1,100 Workers from two Warrior Met Coal mines in Brookwood, Alabama have been on Strike since April amid Union contract negotiations with the company.

It has become one of the largest labor demonstrations seen in the Deep South, a region that is typically hostile to labor disputes.

Workers say they took on a $6-an-hour cut in wages and reduced benefits in their 2016 Union contract after Walter Energy, which eventually became Warrior Met Coal, declared bankruptcy in 2015.

UMWA rejected a contract offered up by the company in April, just a few weeks after the Strike began, which would have given Workers a $1.50 pay increase over five years.

Workers say they want pay and benefits to match what they were receiving before the contract that was signed back in 2016.

“It’s about time to get what we deserve.  We brought this company out of bankruptcy,” said Mike Wright, 45, a Brookwood Miner on Strike - one of the dozens who were in attendance at the protest. “We deserve to get back what we had.”

Miners said that in addition to a cut in pay and benefits, the company has also gotten stricter on attendance.

Workers could be expected to work seven days a week, up to 16 hours a day, and termination for missing more than four days of work - except in the case of a family death.

Coal mining is already a dangerous job, with Miners going hundreds of feet underground and being exposed to toxic fumes, like methane gas.

Brian Kelly, 50, a third-generation Miner and President UMWA Local 2245 who attended the protest with his wife, two daughters and grandson, said that many of his Co-Workers struggle with paying medical bills after health care became more expensive for Workers.

“We have debt collectors all over our people because we can’t afford to pay these bills,” Kelly said. “There used to be a little respect for people who go down there and this company just lost all respect for us.”

UMWA Local 2397 President Carl White said BlackRock likely sees “that this company is not performing like it did when the Union Workers were in these coal mines.”

“We’re not asking for much here,” White said. “It’s time to come to the table and give us a fair and decent contract.”

To Continue Reading This Labor News Report, Go To: www.theguardian.com/business/2021/jul/28/union-advocates-rally-striking-alabama-coalminers