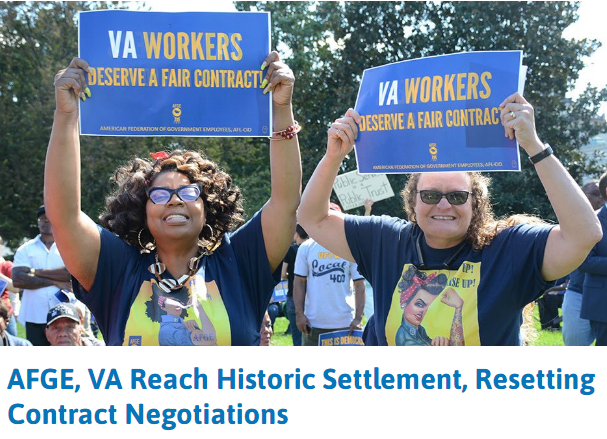 (WASHINGTON, D.C.) - The American Federation of Government Employees (AFGE) National VA Council (NVAC) and the Department of Veterans Affairs (VA) have reached a historic settlement to restore workplace rights and overturn anti-Worker policies implemented by the Trump Administration during the past four years.

The July 20th settlement also resolves pending litigation and outlines the parameters for the upcoming negotiations of the new Collective Bargaining Agreement - the largest Union contract in the Federal Government.

“I’m proud to share that all of your work - and that of our Union as a whole - has paid off in historic fashion,” NVAC President Alma Lee said.

“After four years of bad-faith negotiations and anti-Worker behavior at the bargaining table, the VA has agreed to a global settlement with AFGE.  We’re essentially creating a clean slate for future negotiations between the VA and AFGE, restoring (Title 38) Official Time and remedying the damage done by the Trump Executive Orders” she said

Here's a summary of some of the victories our union secured for VA employees nationwide:

Restoring Title 38 Workplace Rights - Under the agreement reached by NVAC and the VA, the VA will rescind the Trump-era 7422 determinations on Title 38 Official Time, allowing Health Care Professionals to once again represent and defend their colleagues in grievances, investigations, disciplinary hearings and other workplace disputes.  This will resolve our now-pending Federal Lawsuit in partnership with our Sister Unions representing Title 38 Employees: NNU, NFFE and NAGE. Title 38 Employees are Physicians, Dentists, Podiatrists, Optometrists, Chiropractors, Nurses, Nurse Anesthetists, Physician Assistants and Expanded-Function Dental Auxiliaries (EFDAs).  AFGE represents more than 60,000 of these front-line VA Health Care Professionals across the country.  There are significantly more throughout the VA.

Restarting Negotiations For A New Contract - NVAC and the VA are expected to return to the bargaining table within the next four-to-six months.  Under this agreement, the VA and NVAC will restart negotiations with a limited reopener, which will only include 12 articles listed in the settlement.  Fifty-five other articles from the 2011 Master Agreement will be rolled over.  Both parties have also agreed to disregard previous bargaining history, including proposals, grievances, as well as last November’s decision by the Federal Service Impasses Panel, which would have made anti-Worker changes to the 2011 Master Agreement.  This will resolve more than 10 of AFGE NVAC’s National Grievances alleging bad-faith bargaining on the part of the VA, several of which were sustained in arbitration.

Reimbursing Expenses And Hours Used For Representational Duties - Under the Trump Executive Orders, AFGE Representatives and Locals had to perform representational duties on leave and off-the-clock, as well as pay out-of-pocket expenses for offices, equipment and technology.  This agreement will make whole impacted Union Representatives and AFGE/VA Locals, who will have to opt-in and submit a claim under through an electronic claims submission process and provide supporting documentation, as applicable.  “AFGE/NVAC has worked tirelessly to reach this settlement, which is a complete restoration of worker rights and reset of the previously toxic relationship between Workers and VA leadership,” Lee added. “We look forward to the VA making good on the pro-collective bargaining promises of the administration and negotiating, in good faith, a new Collective Bargaining Agreement that ensures the VA remains a great place for Employees to work and for Veterans to receive care.”

To Continue Reading This Labor News Story, Go To: www.afge.org/article/afge-va-reach-historic-settlement-resetting-contract-negotiations/?fbclid=IwAR0OwoLQtvNzjY9HBsVk5TlMM6fk2xFtYiybYYBP5qmaZ9Nsue4n3LJ8Eq8