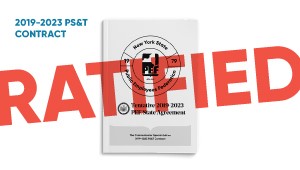 (ALBANY, NEW YORK) – Public Employees Federation (PEF) Members turned out in force to ratify the 2019-2023 PS&T Collective Bargaining Agreement, with 56% of the Membership (28,000) voting; 96% of PEF Members voted in favor of the recently negotiated agreement.

“Despite an unprecedented pandemic and with New York on ‘pause,’ the contract team worked tirelessly to defend the rights of Members and to bring to the table the best possible agreement during these trying times,” PEF President Wayne Spence said.

The 2% base salary increases are in line with other Public Sector Union Contracts and are retroactive to April 2019.

“Since the Spring of 2020, states have faced staggering economic hardships,” Spence said. “We are pleased New York saw the value of our Membership and agreed to annual base salary increases.  PEF Members were on the frontlines of this pandemic and the whole state rallied behind them to flatten the curve.  Heroes don’t deserve zeroes and the PEF Contract Team delivered on that.”

Although there are increases to health insurance co-pays, they go into effect in January 2022 after the implementation of three years of salary increases.

Importantly, there are no changes to the Employee share of health insurance premiums, PEF Officials said.

The contract also requires all state agencies to develop and implement a tele-commuting policy within nine months of ratification.