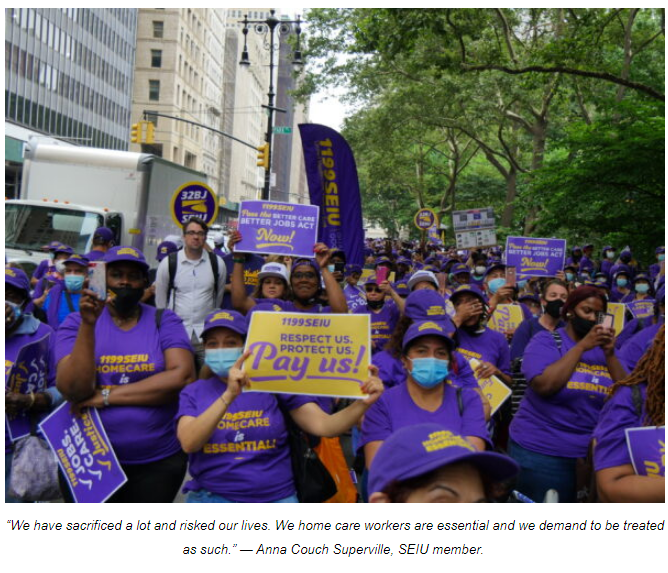 (NEW YORK CITY) - Help - in the form of the Better Care Better Jobs Act - could finally be on the way for the more than 800,000 Americans across the country now languishing on a wait list for vital Home and Community Based Services (HCBS), but if they’re kept waiting much longer, it’ll be because Working Women of Color and Immigrants also stand to be empowered like never before.

There are some four-and-a-half-million Direct Care Workers in the United States today - the overwhelming majority of them Women of Color and Immigrants working for poverty wages, sometimes, as little as $9-an-hour - with zero benefits.

They are a largely mature workforce - almost a quarter of Direct Care Workers are 55 and above - performing incredibly strenuous work, every day.

And yet, more than 40% of them can’t make ends meet without some form of public assistance.

And, one in four was born outside the country.

Despite all this, the home care industry is on pace to become the fastest-growing source of jobs in the Nation.

Over the last decade, the number of Direct Care Workers in the U.S. grew by half - shooting up from three million in 2009, to roughly 4.6 million in 2019.

The U.S. Bureau of Labor Statistics (BLS) further projects the number of Home Health and Personal Care Aides will jump nearly 35% over the next 10 years.

By way of contrast, the average growth rate for all other U.S. occupations is expected to rise by just 4% over the same time period.

The Better Care Better Jobs Act (S. 2210) seeks to invest $400 billion into expanding Medicaid HCBS, guaranteeing more Americans will get the help they need to live fruitful, independent lives, while at the same time also helping to lift the Workers who care for them out of poverty and removing significant barriers to Unionization.

Those egalitarian features, however, are what make the Better Care Better Jobs Act so unpalatable to critics whose interests depend on keeping a large sector of society politically and economically disadvantaged.

“While privately, some key Republicans acknowledge the need for more HCBS funding, it is unlikely any will vote for it.  Especially since (President Joe) Biden and Hill Democrats plan to partially pay for it and other provisions by raising taxes on corporations - a step Congressional Republicans flatly reject,” Forbes’ Howard Gleckman notes.

To Continue Reading This Labor News Report, Go To: www.laborpress.org/the-better-care-better-jobs-act-a-game-changer-for-working-women-of-color/