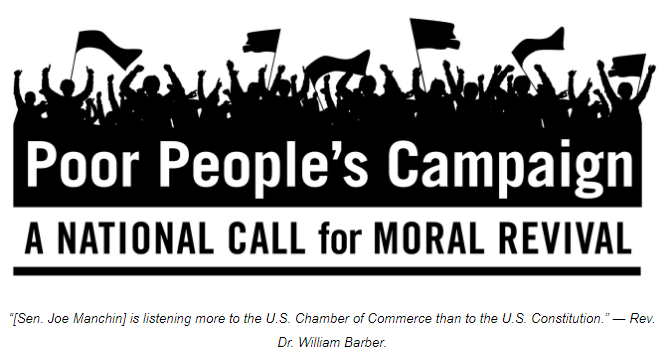 (PHOENIX, ARIZONA) - The Poor People’s Campaign held actions from sit-ins to small rallies at U.S. Senators’ offices in more than 30 states on Monday (July 26th), demanding that they enact a four-point program of abolishing the filibuster, raising the National Minimum Wage to $15 an hour, fully restoring the Voting Rights Act of 1965 and passing the For the People Act, an expansive voting-rights measure originated by the late U.S. Representative John Lewis.

In Phoenix, 39 people - including the Reverend Jesse Jackson and Poor People’s Campaign Co-Director - the Reverend Dr. William Barber, were arrested in a sit-in outside the office of U.S. Senator Kyrsten Sinema, a Democrat who has opposed ending the filibuster and raising the Minimum Wage to $15.

In Arizona, Reverend Barber said during an online rally later that night, nearly half the workforce makes less than $15.

In Portland, Maine, four people were arrested in a sit-in at Republican U.S. Senator Susan Collins’ office after staffers refused to answer whether she supported the four demands.

The actions were leading up to a 27-mile march from Georgetown, Texas to Austin over the next five days, a rally in on Austin July 31st, and a large march in Washington August 2nd.

The Georgetown-Austin march is intended “to nationalize what’s going on in Texas,” Barber said. “Texas is the least insured, hardest to vote in, and most underpaid state in the Nation.”

Named after the Economic Justice Project Dr. King was trying to launch when he was assassinated in 1968, the Poor People’s Campaign is consciously modeled on the 1960s non-violent Civil Rights Movement.

Reverend Barber’s rhetorical cadences and the quieter righteousness of the Reverend Liz Theoharis, its other Co-Director, echo the movement’s alliance of Southern Black Preachers and White Northern Clergy.

Theoharis said the Georgetown-to-Austin march was styled after the Selma-to-Montgomery march of 1965 that led to the passage of the Voting Rights Act.

Georgetown, now a suburb of Austin, was a Ku Klux Klan stronghold in the 1920s, but also the first place where Klan Members were successfully prosecuted in Texas.

“This is our Selma moment,” the campaign declared.

To Continue Reading This Labor News Story, Go To: www.laborpress.org/unions-join-poor-peoples-campaign-to-bust-the-filibuster/