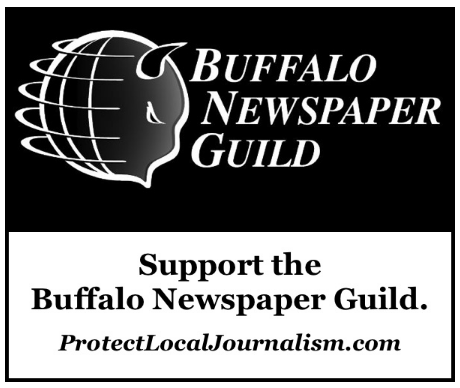 (BUFFALO, NEW YORK) – Buffalo News Reporter Sandra Tan knows the Buffalo Community gets it when it comes to the Buffalo Newspaper Guild’s fight to save local journalism.  Why?  Because she was even approached by a concerned reader while in church who wanted to know what was going on, why Reporters were withholding their by-lines and where negotiations on a new contract stood with Lee Enterprises - the new out-of-state owner of Western New York Region’s largest daily newspaper.

“We’ve ‘gotten a lot of community support’ and (the people the Newspaper Guild have spoken to) ‘have felt outrage’ (over what Lee Enterprises is attempting to do).  ‘I even got stopped by someone at church - it’s a sign of how much of what the company is doing has filtered down’ (to The News’ readers),” said Tan, who also serves as Guild President and whose Union Negotiating Team is preparing to resume contract talks later this week with management.

Asked why she believes the Newspaper Guild has received such a large amount of community support from readers to subscribers to community and elected officials, Tan answers: “The reason is that (all have) ‘recognized how essential an informed citizenry and Democracy are.’”

The two sides will resume negotiations on Friday (July 30th), a day before the Guild’s current three-year contract expires on Saturday (July 31st).

The Buffalo Newspaper Guild, one of the oldest Newspaper Unions in the United States, represents roughly 150 News and weekly Sun newspaper Employees, including most Newsroom Staff and Employees in Circulation, Accounting and Prepress.  The Newspaper Guild also represents Workers at four independent print shops in Western New York.

In order to educate the community to what it now has and what could be lost, the Newspaper Guild embarked on a series of community actions - including a billboard, an on-line petition and a by-line Strike - in response to Lee Enterprises’ continued demands to weaken job security protections and outsource local Union Jobs to its Non-Union hubs in other states and Mexico.

Lee Enterprises, the Iowa-based media chain that bought The News early last year, is seeking the power to lay off Guild-represented Workers for any reason, Union Reps say.

Lee Enterprises also wants to freeze Workers’ pensions, even though the pension costs the company nothing, and slash many other Employee benefits, Union Officials add.

Ultimately, Lee’s bargaining proposals, which include outsourcing the jobs of Copy Editors and international award-winning Page Designers, will weaken the paper and hurt the community’s access to strong local news coverage, the Newspaper Guild argues.

And - on top of that, Lee Enterprises has insisted on the right to get rid of the newspaper’s overworked Customer Service Representatives and send those jobs to Lee’s Call Center in Mexico.

According to Tan, management’s stance on outsourcing the newspaper’s Page Designers remains a major hurdle, as well as Lee Enterprises zeroing in on the “millions of dollars” held with the Guild’s Pension Plan that the company wants to use to “prop up other underfunded (Worker) pensions” that it is on the hook for in some of its other holdings.

“We ‘want to make sure our Members retire with security,’” Tan, who’s been employed as a Reporter at The News for 21 years, said in response to the pension situation.

“I ‘never imagined’ (dealing) with a company ‘that asks for so much and cares so little for the local community’ - ‘that’s the risk of being owned by a giant out-of-town corporation that is not invested in Western New York.’  ‘That’s what’s really being hammered home,’” she continued.

“We ‘will push back and do what’s needed to push the company to a more reasonable position.’  It’s an ‘uphill’ battle, ‘but in the end our community support and aggressive messaging (shows) that we will not just roll over,’” Tan said.

While the signing period for its on-line petition has come to an end, the Newspaper Guild is asking the readers, subscribers and supporters of Buffalo’s largest daily newspaper to e-mail their displeasure - if they are so inclined, directly to several major players at Lee Enterprises and at The Buffalo News: Lee Enterprises CEO Kevin Mowbray: kevin.mowbray@lee.net; Lee Enterprises Tim Millage: tim.millage@lee.net; and Buffalo News Publisher Tom Wiley: twiley@buffnews.com. 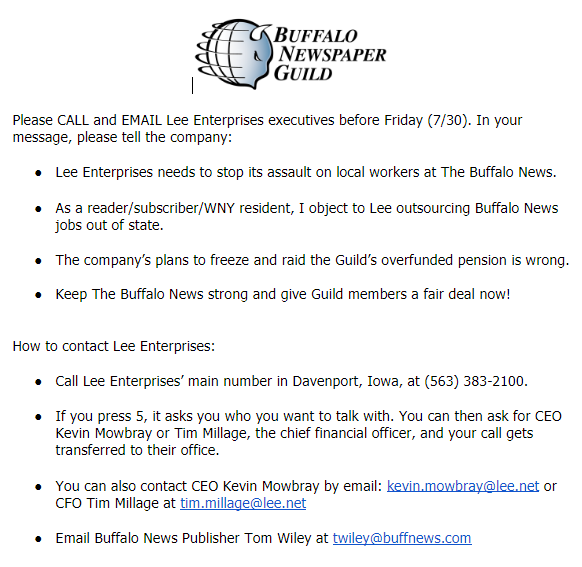