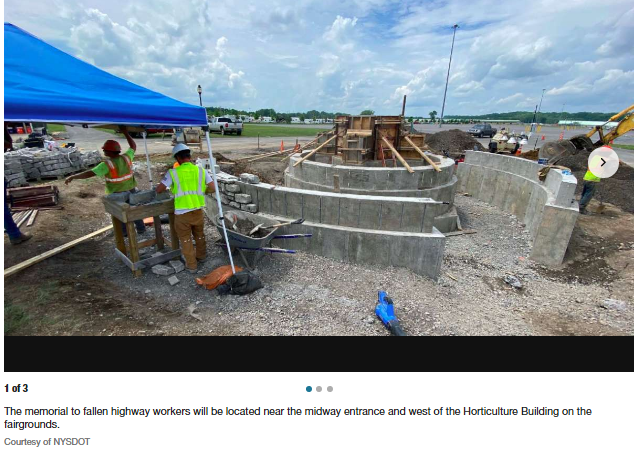 Between 2003 and 2017, 1,844 Workers were killed at road construction sites nationwide, according to the federal Bureau of Labor Statistics (BLS).

The memorial “represents an opportunity to reach hundreds of thousands of people who visit the fairgrounds - making them aware that their failure to pay attention while driving has real life and death consequences,” NYSDOT Commissioner Marie Therese Dominguez said.

The announcement also included an update on Operation Hardhat, an enforcement effort to crack down on work zone violations.

State troopers have issued 871 tickets already this year and local law enforcement has issued another 35.

This year, the Thruway Authority is deploying trucks with large radar boards to alert drivers of their approach speed, among other enhancements, to improve Worker safety.

The NYSDOT has also begun using portable rumble strips and work zone cameras in every region of the state to protect Workers.

According to the latest figures, trips to workplaces, for example, were down 37% in June and early July, compared to a baseline established in January and February 2020.

Trips to transit stations were down 34% during that time period.

Grocery and pharmacy and park trips were up 3% and 56%, respectively, although the surge in parks is likely due to the Summer weather.

To Directly Access This Labor News Report, Go To: www.timesunion.com/news/article/Getting-There-New-York-to-unveil-highway-workers-16322653.php?fbclid=IwAR3Y8w4FZN62dezlvtt3qDGYWpIJurhfMxnHD9Azcg-2mK6N0YKHoXsDFvo#photo-21250409