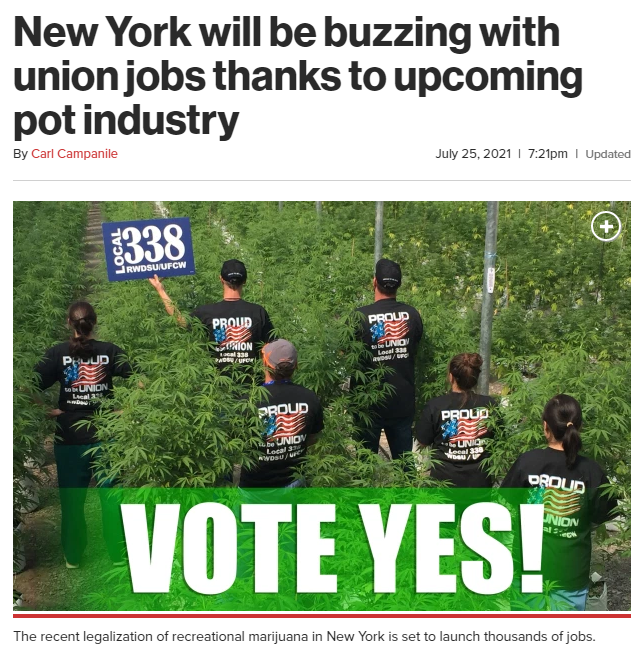 (NEW YORK CITY) - Union jobs in New York are about to be so dope.

Thousands of well-paying gigs - with great benefits to boot - are on the horizon in the state, thanks to the recent legalization of recreational marijuana, Labor Leaders tell The New York Post.

The Local 338 of the Retail, Wholesale and Department Store Union (RWDSU) - the so-called “Cannabis Union” whose patch is a bright green marijuana plant - is chomping at the bit to represent thousands of Workers in the budding market.

“We expect a decent-sized cannabis industry developing in New York State,” said Joseph Fontano, Secretary-Treasurer of the Long Island-based Union. “I think the numbers of new Workers will be significant.  Will it be in the thousands?  There will be a few thousand Workers in the cannabis industry.”

He added: “We’re going to push to organize as many of those facilities as possible.”

The law legalizing the recreational use of marijuana was approved in March, but Governor Andrew Cuomo has yet to launch the regulatory agency to issue licenses to grow and sell cannabis.

A Rockefeller Institute study estimated the new weed industry could create 30,000 to 60,000 jobs.

Under the new law, firms involved with cultivating, manufacturing, transporting or selling pot will have to have a “Labor Peace Agreement” - enabling Unions to organize all Workers.

Fontano’s Union currently represents several hundred Workers employed for cannabis that’s produced, distributed and sold for medicinal purposes - but the number of Union jobs will grow exponentially when full-scale legalization of marijuana for the adult market is up and running.

And it’s negotiating a Labor Deal with a seventh company as it prepares to represent more Pot Workers in the recreational market.

Workers represented by Local 338 who work at cannabis farms and manufacturing facilities make about $24 per hour.

The average pay for Workers at retail stores is $19.50 per hour.

And Pharmacists in the Union earn about $65 per hour, which is competitive or even higher than chain drug stores.

All of the Labor Contracts provide family medical coverage that includes dental and vision coverage with no co-premium, which is paid by companies for all full-time Workers.

Co-pays are $5 and $10 for doctor visits and prescriptions.

“These are good-paying jobs with good benefits.  The Labor Movement is always looking for an opportunity to grow.  We’re very excited about the growth opportunities in the cannabis industry,” Fontano said.

To Continue Reading This Labor News Story, Go To: https://nypost.com/2021/07/25/new-york-will-be-buzzing-with-union-jobs-thanks-to-pot-industry/