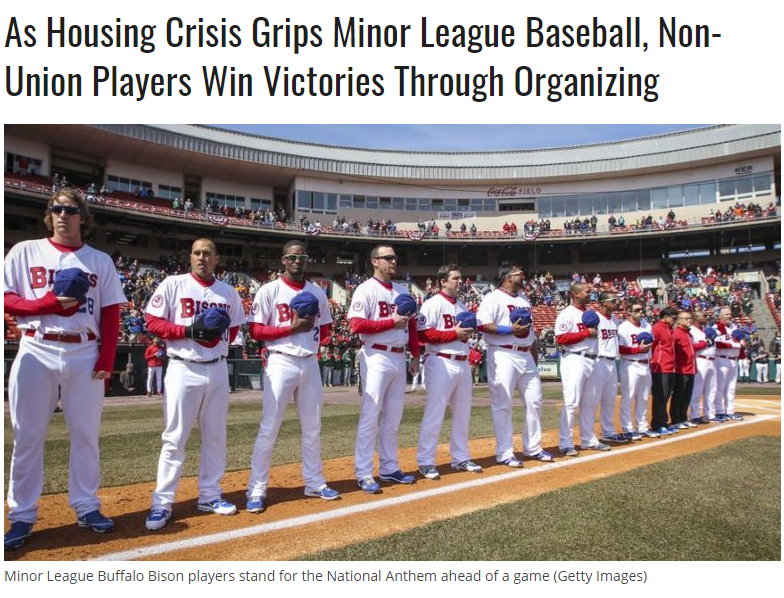 All across Minor League Baseball this Summer, Players are finding themselves struggling with homelessness.

One viral video by the Advocates for Minor Leaguers garnered over 160,000 views on Twitter by revealing how nearly a dozen Cardinals Double-A affiliate Springfield Players were forced to sleep on the floor of a hotel banquet room while on the road.

They were traveling to San Antonio that night, but when it came time to sleep, they were told that there weren’t any rooms available to them.

“The housing situation in Minor League Baseball right now is nothing short of dire,” said Harry Marino, the Executive Director of Advocates for Minor Leaguers and a former minor league pitcher himself.

This Memorial Day weekend, the Chicago Cubs’ low Single-A team, the Myrtle Beach Pelicans, also found themselves facing uncertainty about where they would sleep one night.

On the last day of a road trip, Players were told there were no rooms available for them in the hotel they’d been staying at during previous homestands, in the popular beach town where their employers were based.

Many debated sleeping on the benches and spare equipment in the cramped locker room of the Myrtle Beach Pelicans.

Distressed, several Players contacted the year-old Advocates for Minor Leaguers to see if they could help.

Within an hour, Advocates for Minor Leagues (@MiLBAdvocates) blasted out a tweet to their followers, many of whom are baseball fans and players.

“Per multiple sources, the Myrtle Beach Pelicans were told they’d be ‘on their own’ in finding a place to sleep tonight because the team hotel is sold out,” they tweeted. “According to one source, at least a dozen players are planning to spend the night in the locker room.”

Within two hours, the Cubs’ minor league affiliate ensured all players had hotel rooms during the expensive holiday weekend.

“We had two separate situations where teams - the Orioles and the Cubs affiliates - had put Players in a situation where the players had uncertainty about where they were going to be able to sleep that night,” Marino said. “And in both cases, we publicize the situation.  And within hours, the situation was resolved and the guys had hotel rooms to stay in for the night.”

Advocates for Minor Leaguers is already drawing a lot of support from baseball fans, who are attacking teams on Twitter after seeing the @MiLBAdvocates tweets highlighting the abuse of Minor League Baseball Players.

To Continue Reading This Labor News Report, Go To: https://paydayreport.com/as-housing-crisis-grips-minor-league-baseball-non-union-players-win-victories-through-organizing/?fbclid=IwAR2fAy8THMcYUeChOlX7AXNJ6GxeywApUxl0jdijY_OrTCUEKeE4B-Ju7w8