Worker Tells Senators âWhyâ The PRO Act âIs A Mustâ - âWeâve Been Overworked, Weâve Been Injured On The Job, Disrespected By Supervisors And Forced To Work In Bad Conditions. We Want A Union To Help Protect Us.â 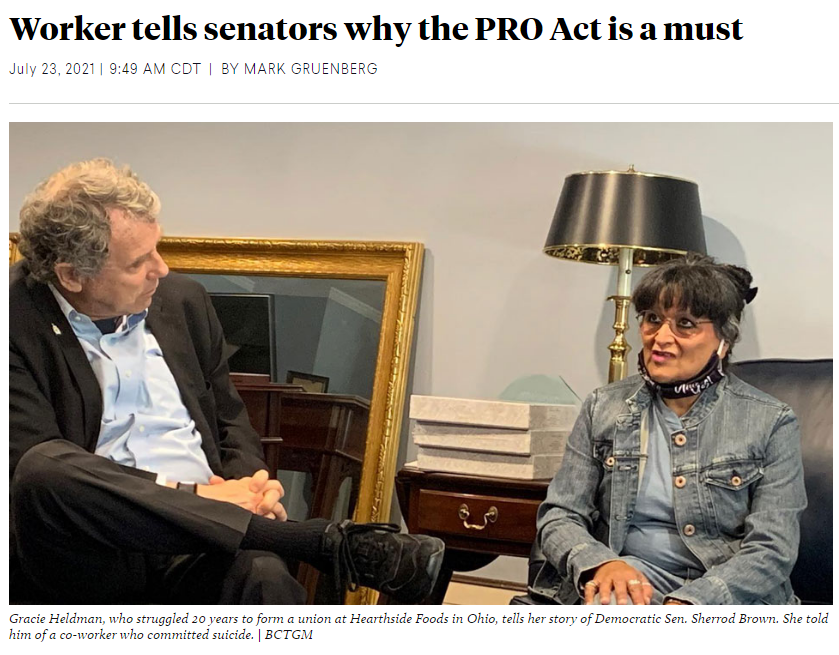 (McCOMB, OHIO) - For 20 of the 33 years she’s worked at Hearthside Foods, an industrial bakery in McComb, Ohio that turns out cookies, crackers and candy bars for big firms such as Nabisco and Kellogg’s, Gracie Heldman has campaigned for a Union - specifically the Bakery, Confectionery and Tobacco Workers and Grain Millers (BCTWGM) - there.

It forced Workers to attend anti-Union harangues in one-sided “captive audience” meetings, under pain of discipline if they didn’t.

During another drive, it even threatened, also illegally, to close up shop if the Workers went union, Heldman told U.S. Senators earlier this month.

The bullying, intimidation, harassment, labor law-breaking and interrogation by Union-Busters or supervisors while Workers were on the job succeeded.

Enough people got scared, especially by the firings, that when the votes occurred, after drawn-out anti-Union campaigns by the bosses and their “consultants,” BCTGM lost.

Heldman brought her story, which is typical of what happens to Workers during Organizing Drives, to the Senate Labor Committee’s hearing on the Protect the Right to Organize (PRO) Act, the wide-ranging Pro-Worker Labor Law Reform.

It would outlaw such abuses, force the Union-Busters’ shady practices into the open - and do much more.

But not so from the Republican senators, even though a new Hart Research poll shows a plurality of rank-and-file GOP voters (45% for-40% against), including a plurality of Trumpites (45%-41%), back the PRO Act and its goals.

Democrats supported it by an 87%-to-6% score and Independents clocked in at 60%-to-26% in 4,114 calls stretched over the nine states it covered.

Scores were almost as lopsided in those “battleground” states too.

It also forces Union-Busters and their spending and clients into the open.

And, it mandates binding arbitration when bosses won’t bargain a first contract.

Heldman described the obstacles Workers face to Unionizing and she also gave a simple summary of why Workers want Unions - which, other polls show, a majority do.

To Continue Reading This Labor News Story, Go To: www.peoplesworld.org/article/worker-tells-senators-her-story-of-why-the-pro-act-is-a-must/?fbclid=IwAR2puZoSgYE9MHLyZFiuEfdGxzB31a75kMlkygdUQHD_cnA49g5z45ISLnU