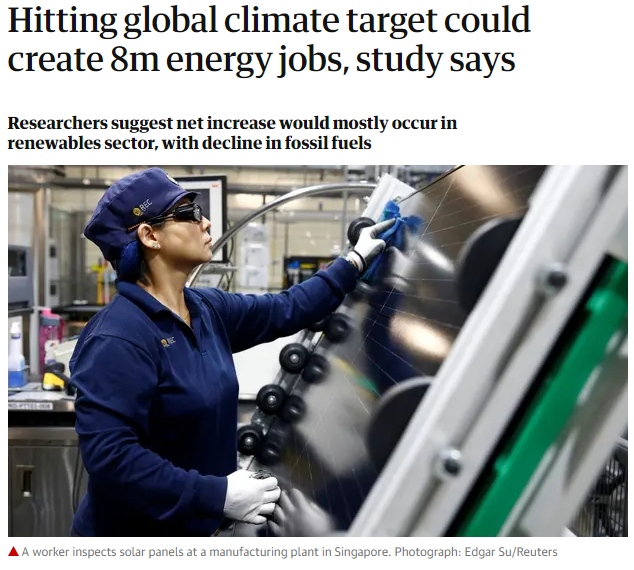 If some politicians are to be believed, taking sweeping action to meet the goals of the Paris Climate Agreement would be calamitous for jobs in the energy sector, but a study suggests that honoring the global climate target would, in fact, increase net jobs by about 8 million by 2050.

The study - in which researchers created a global dataset of the footprint of energy jobs in 50 countries, including major fossil fuel-producing economies - found that currently an estimated 18 million people work in the energy industries, which is likely to increase to 26 million if climate targets are met.

Previous research suggests that pro-climate polices could increase net energy jobs by 20 million or more, but that work relied only on empirical data from the Organization for Economic Cooperation and Development (OECD) Countries and generalized the results for the rest of the world using a multiplier.

But the data varies dramatically across regions, driven by differences in technology and rates of Unionization, among other factors.

For instance, extracting one million tons of coal in India takes 725 Workers, versus 73 in the U.S.

The latest analysis, published in the journal One Earth, combined such employment factors across a global dataset (including key fossil fuel, non-OECD economies such as Russia, India and China) with an integrated assessment model, which combines climate and economic estimates to predict the costs of climate change.

“This dataset makes the analysis more grounded in reality, rather than using a multiplier,” said one of the study’s authors, Dr. Sandeep Pai, who led the analysis as part of his PhD at the Institute for Resources, Environment and Sustainability at the University of British Columbia in Canada.

Under the target scenario of global temperatures being held well below 2C of pre-industrial levels, of the total jobs in the energy sector in 2050, 84% would be in the renewables sector, 11% in fossil fuels, and 5% in nuclear, the analysis found.

Although fossil-fuel extraction jobs - which constitute the lion’s share (80%) of current fossil fuel jobs - will decline steeply, those losses should be offset by gains in solar and wind manufacturing jobs that countries could compete for, the researchers estimated.

However, while most countries will experience a net job increase, China and fossil fuel-exporting countries such as Canada, Australia and Mexico could have net losses.

Undoubtedly, there will be winners and losers.

The winners will be people who take these jobs in the renewable sector and there are the health benefits of fresh air and cleaner cities - but there will also be people, companies and governments who lose out, Pai said.

To Continue Reading This Labor News Story, Go To: www.theguardian.com/environment/2021/jul/23/hitting-global-climate-target-could-create-8m-energy-jobs-study-says?fbclid=IwAR3-HqGS495WoOWWHud1C-5kFvIMJqGu3MlBnNRxpmh2KRuy-SHRCn1cG3Y