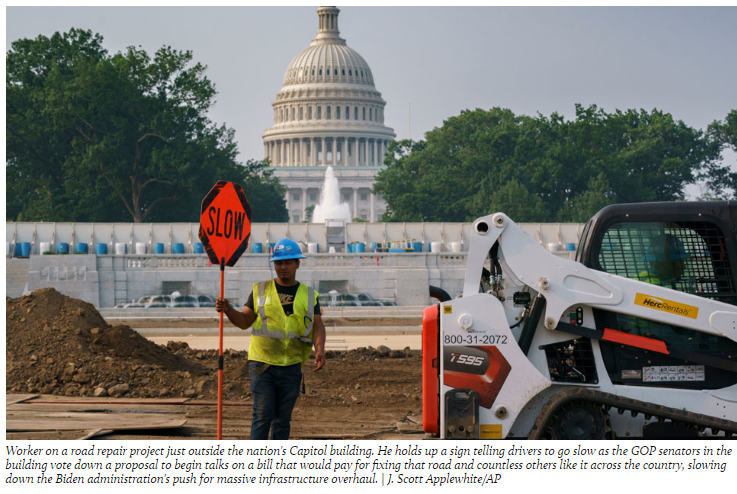 The latest GOP roadblock was a 49-51 Senate vote on July 21st against the “motion to proceed” to debate on the Senate version of the hard Infrastructure Bill.

All 50 Republicans, even those who agreed several weeks ago with Democratic President Joe Biden on an outline of the measure, voted “no.”

But so did Majority Leader Charles Schumer, D-N.Y., in a parliamentary move.

He had to switch his vote to “no,” the “winning” side, so he can try, try again to get debate going during the week of July 26th, before Congress quits for yet another recess.

“This vote is only the first step in the legislative process on the Senate floor.  It is merely a vote about whether the Senate is ready to begin debating a bipartisan Infrastructure Bill,” Schumer told his colleagues.

They, the Corporate Class, or both, are erecting other roadblocks.

The Republicans agreed with Biden on the outlines of the $1.2 trillion “hard” Infrastructure Bill, but more than half of the money will come from unspent Coronavirus Relief Funds.

That’s another giveaway to the GOP, since Coronavirus cases, notably among unvaccinated Republicans, are increasing again from coast to coast.

That “reconciliation” measure, with a $3.5 trillion price tag, already suffered one loss to the GOP.

Biden’s plan to partially pay for it by increasing IRS tax enforcement, bringing in at least $100 billion more yearly by going after corporate crooks, was dropped.

The Corporate Class is also lobbying hard against another Biden plan to pay for the human Infrastructure Bill: Raising the Federal Corporate Income Tax Rate from 21% - the rate in the 2017 Trump-GOP tax cut for corporations and the rich - to 28%.

Their lobbying coalition against the tax hike includes at least a dozen of the huge firms that paid zero income taxes last year as a result of the tax cut, The Washington Post reported.

In other words, the Corporate Class wants the benefits of infrastructure, paid for by other taxpayers - not by them.

To Continue Reading This Labor News Report, Go To: https://peoplesworld.org/article/again-gop-puts-party-before-progress-blocking-infrastructure-bills/