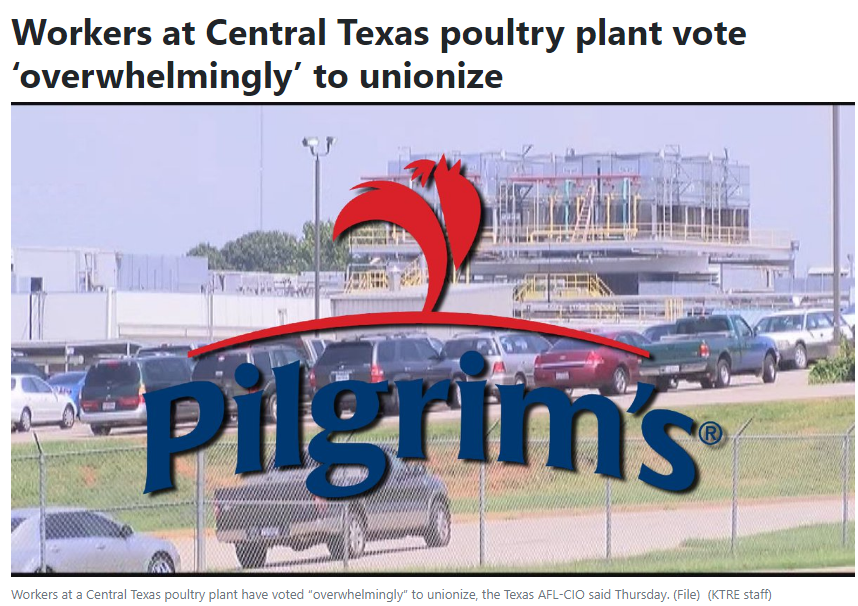 The next step is the negotiation of a contract by United Food & Commercial Workers (UFCW) Local 540 - covering pay, benefits and working conditions.

“Congratulations to workers at Pilgrim’s Pride for coming together to form a Union in your workplace. Your overwhelming vote will definitely make your lives better through higher wages, benefits and a voice on the job,” Texas AFL-CIO Secretary-Treasurer Leonard Aguilar said.

“Polling shows tens of millions more Workers in this country would join a Union if they could and UFCW Organizers are making it possible for thousands of Workers to do just that through their commitment to organizing in Texas,” he said. “They are engaged in some of the toughest Union Organizing in some of the toughest places and this victory shows that when Workers fight anywhere, Workers can win anywhere.”

Brazil-based JBS bought a majority stake in the company in 2009 for $800 million and moved its U.S. Headquarters to Greeley, Colorado.

Pilgrim’s Pride was the largest chicken producer in the country until it filed for bankruptcy in 2008.