A First: Teamsters Union Reaches Agreement On Contract With XPO Logistics - Deal In Miami âComes After Yearsâ Of Negotiations 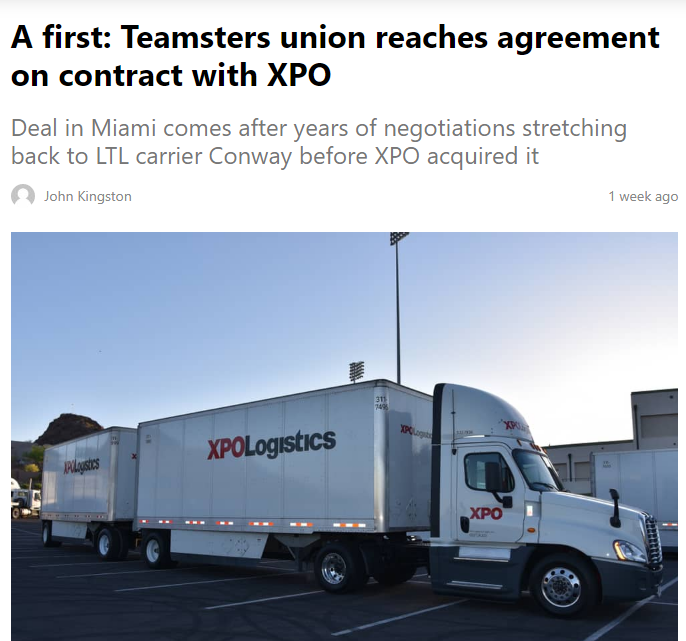 (MIAMI, FLORIDA) - The Teamsters Union has finally broken through with XPO Logistics, reaching a contract agreement for the company’s Miami facility with rapid unanimous approval then being granted by the Rank-and-File.

The contract between XPO and the Teamsters is historic in that it is the first the Union has been able to reach with XPO anywhere in the U.S.

XPO is partially Unionized in Europe and says it has 212 Unionized Employees in the U.S. and Canada.

There are several other XPO facilities where Workers have voted to be represented by the Teamsters, but where no contract has been reached.

XPO’s Miami facility traces back to Conway Freight, the LTL carrier that XPO acquired in September 2015.

Workers in Miami actually had voted to be represented by the Teamsters a year earlier, when it was still a Conway facility.

In a prepared statement, the Teamsters quoted Jim Hoffa, the Union President, as saying: “XPO management said Workers in the U.S. would never ratify a contract, but never is now.”

The response from XPO about the contract was succinct: “The Teamsters offered us a contract that was too attractive to turn down.”

In an interview with FreightWaves, Greg Chockley, the National Campaign Coordinator for the Teamsters, said the two-year contract is retroactive to June 1st.

While there are pay considerations, Chockley mostly wanted to discuss the procedures and rules that come with the contract: “They are looking to have their working ways put into writing and hold the employer accountable in ways that they don’t have as unorganized Workers.”

He ticked off a list of provisions in the contract: Protection of retirement benefits; Protection of processes; and Requiring just cause for termination or discipline.

Chockley added that there also is a provision for binding arbitration for disputes, with the judging in the process to be done by an independent arbitrator.

To Continue Reading This Labor News Story, Go To: www.freightwaves.com/news/a-first-teamsters-union-reaches-agreement-on-contract-with-xpo/amp?fbclid=IwAR1ru4Mlr0hNNRlBGhOhd47mm7RHG9kaIGQq9ekUqQtNS5riUu2e6PenmPU