Minnesota Organizing Drive Puts The âUnionâ Back In ACLU

Published Thursday, July 22, 2021
by The Union Advocate Via Workday Minnesota 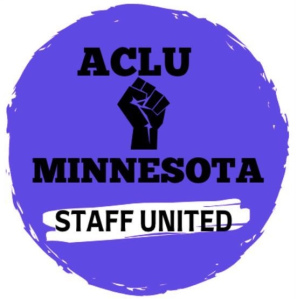 (MINNEAPOLIS, MINNESOTA) - Minnesota Employees are part of a wave of organizing activity across the U.S. that’s putting the Union back in the American Civil Liberties Union (ACLU).

After a speedy Organizing Drive that took just two months, eligible Staff at the ACLU of Minnesota won voluntary recognition from the 70-year-old Civil Rights Organization on July 2nd, five days after the Union announced it had support from a “super-majority” of 11 eligible Employees.

The same week, Employees at two other state affiliates of the ACLU - Arizona and Illinois, announced Union Drives of their own.

In all, Employees of 12 state ACLUs have gone public with their Unions.

“We’re the ACLU - we’re built for this,” Staff Attorney Isabella Nascimento said with a laugh. “We have Community Organizers who do this work on a day-to-day basis, so it was very easy to have conversations with our colleagues about organizing a Union.”

Negotiations with the ACLU of Minnesota on a first contract have yet to begin.

In a statement, Union Members said they hope collective bargaining will “create organizational stability and transparency, promote pay equity, develop stronger support systems for Staff, increase equity and inclusion within the organization and its leadership and hold management accountable for implementing the organization’s external principles - including its commitment to Organized Labor - within the walls of their workplace.”

They also expressed solidarity with “the growing movement of Non-Profit Workers” organizing for more stable, inclusive and equitable workplaces.

Since 2019, Workers at no less than 17 non-profit and advocacy organizations in the Twin Cities have organized new Unions - a trend that picked up steam in the wake of the COVID-19 Pandemic and the nationwide reckoning on racial justice following the murder of George Floyd.

“Throughout these several months of uncertainty, the mission of the Staff at the ACLU of Minnesota has remained unchanged - to hold government accountable when it harms people and bulldozes their Civil Rights and Liberties,” ACLU-MN Staff United said. “The Staff expects that the face the organization projects to the public will match its internal ethos.  Our decision to Unionize represents an internal accountability mechanism and the Staff’s unwavering commitment toward the organization’s success.”

The Bargaining Unit is likely to grow as the ACLU of Minnesota fills multiple open positions, Nascimento said.

She said the organization has roughly tripled in size in recent years, resulting in some “growing pains that it was becoming increasingly difficult to fix internally without speaking with a collective voice.”