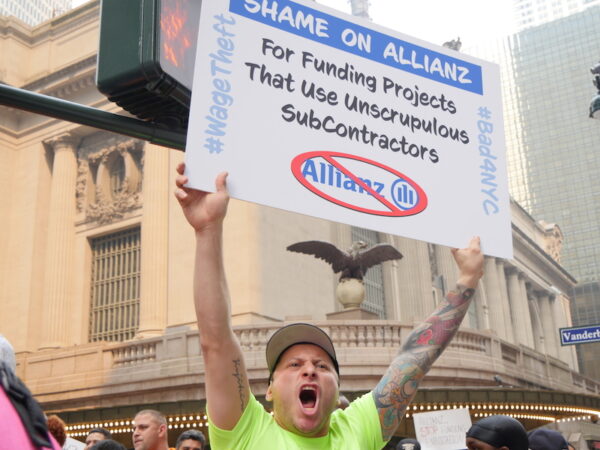 (NEW YORK CITY) - Before Kareame Perkins joined Laborers Local 79, there was no end to wage theft and other abuses she experienced as a Non-Union Construction Worker in New York City.  Sadly, Perkins’ outrageous experiences are emblematic - billions of dollars are stolen from abused Workers throughout New York State each year.

And while Governor Andrew Cuomo and New York City Mayor Bill de Blasio rush to erect monuments and throw ticker tape parades for Working Men and Women - the elite developers and contractors who wield most of the power in this economy continue to run amok.

A series of legislative efforts aimed at curtailing wage theft have already been approved by the New York State Legislature, but they still await Governor Cuomo’s signature.

Cuomo killed one of the bills last year, citing his concerns about the due process rights of bosses.

“There were time when I felt like my life was in danger,” Perkins told a group of some 200 New York City Construction Workers rallying at the corner of East 42nd Street and Vanderbilt Avenue in Manhattan earlier this week.

Perkins came down with COVID-19 during the roughly year-and-a-half she worked for PRC Construction.  The virus knocked her out for three weeks, but PRC reportedly only paid Perkins for a single day.  Sometimes, Perkins said, she worked six days a week - clocking 70 hours on the job, but was only paid for half the time.  There were other times, she said, where she would have to wait three weeks before seeing a paycheck.

Perkins worked Non-Union at PRC, but she could have worked for any number of high-profile contractors operating in New York City, including New Line Structures, ECD NY and Alba Services, that have extensive histories involving sexual harassment, poor safety and wage theft.

This week, the Take It Back Campaign - a coalition of Union and Non-Union Construction Workers - took their fight against wage theft and Worker exploitation to the offices of German Banking Giant Allianz.

Members of the Take It Back Campaign, who initially kept across the street from the offices of Allianz Real Estate of America, marched across the busy thoroughfare and demonstrated on the bank’s doorstep at 60 East 42nd Street.

Together, they called on the multi-billion-dollar conglomerate to start enforcing responsible contractor policies and to stop supporting an “underground economy that creates a race to the bottom.”

Wage theft has been a New York State scandal for more than a decade.

To Continue Reading This Labor News Story, Go To: www.laborpress.org/hey-allianz-quit-bankrolling-wage-theft-and-worker-abuse/