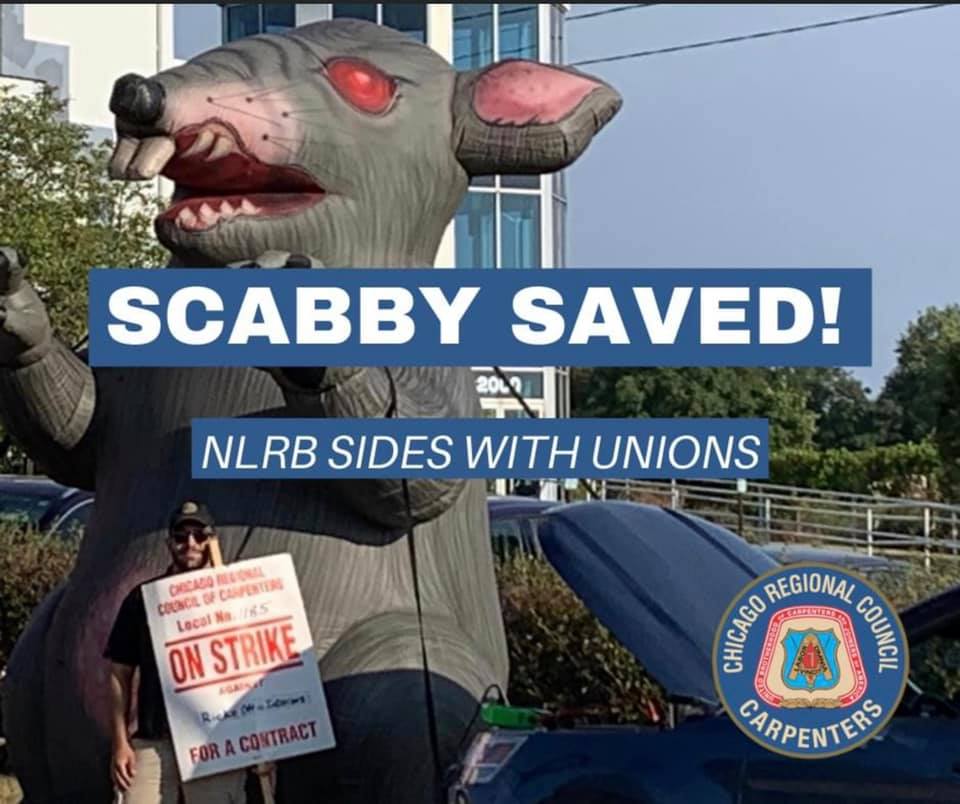 (WASHINGTON, D.C.) - You’ve probably seen him (his snarling mouth and mangy belly are hard to forget): Scabby the Rat, the inflatable rodent at countless picket lines.

Since his birth in 1989 or so, his terrible visage has been a sign of defiance by Workers and a thorn in the side of bad bosses everywhere.

The presence of Scabby sends a message to employers and the public alike that a boss ran afoul of a Union - by hiring scab labor, perhaps - and the Union has turned out in force to put things right.

For a few years, it appeared that Scabby could be exterminated, but rodent admirers can rejoice.

The National Labor Relations Board (NLRB) has decided Unions can continue to display the famous inflatable rat after opposition from employers and Peter Robb, the former General Counsel of the NLRB, who was appointed by President Donald Trump and fired by President Joe Biden.

On Wednesday (July 21st), the NLRB - in a 3-1 decision, found the display of inflatable Labor Union mascots such as Scabby did not violate the National Labor Relations Act.

Robb had argued the use of Scabby was unlawfully coercive.

A Conservative Trump appointee, Robb’s opinions generally aligned with those of employers.

The former General Counsel “wants to find it unlawful to picket, Strike or hand-bill with the rat present,” the official told Bloomberg Law.

To ban the rat, however, the NLRB would have had to reject precedent, which previously found Unions had a right to display Scabby.

Prohibiting Scabby and other inflatables may have also violated the First Amendment.

Scabby is a protest symbol - and a powerful one at that.

Alas for Robb, Scabby will fight another day and the inflatable will remain a frequent sight on the streets, where he will continue to shame employers into good behavior.

In some cases, he may be joined by his inflatable fellows - a large pig or a fat cat - all symbolizing employer overreach and greed.

For unions, saving Scabby is no frivolous matter.

The NLRB’s decision preserves a Labor tradition and affords Unions the space to be confrontational.

That breathing room is precious given the weak state of American Labor Law.

Scabby is proof that despite Right-To-Work (for less) and other assaults, the Labor Movement lives.

And now, so will Scabby.

To Directly Access This Labor News Story, Go To: https://nymag.com/intelligencer/2021/07/nlrb-rules-that-scabby-the-rat-may-live.html