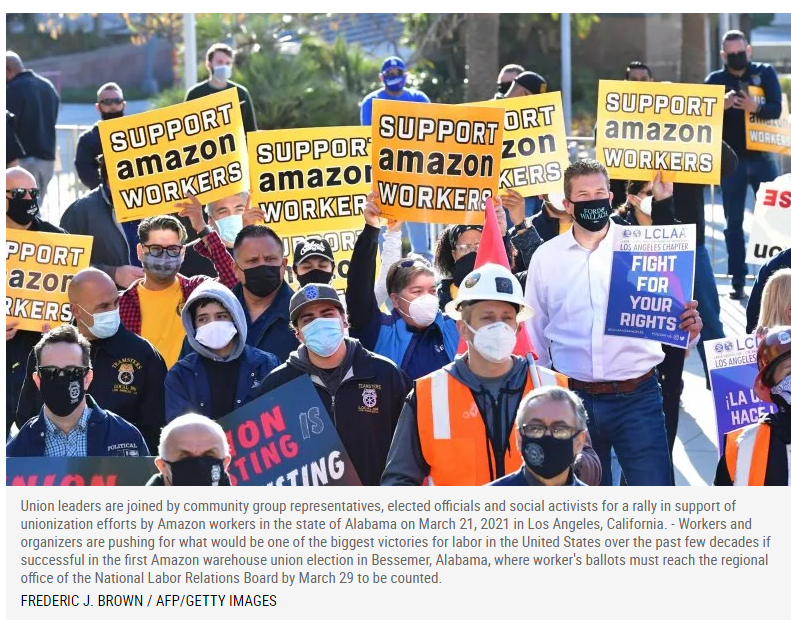 This week, former Amazon CEO Jeff Bezos realized his dream of flying to space, after spending a reported $5 billion on his rocket company.

This is spare change for Bezos, who made $75 billion during the Coronavirus Pandemic alone, launching him into the stratosphere of over $200 billion in personal wealth.

Meanwhile, here on Earth, those who sweat in Amazon's warehouses and deliver the boxes struggle to make ends meet, lack basic health and safety protections and are hard pressed even to take bathroom breaks.

As Molly Kinder of the Brookings Institution has documented, Amazon made billions during the pandemic and Workers saw little of it.

Bezos is not the first entrepreneur to get rich imagining a product or service people love, but there was once a time when Americans who actually did the work saw a part of the profits and had a voice in the workplace.

Henry Ford famously believed his company benefited from his Workers being able to buy the product they made.

Living wages and Labor Unions helped build an American Middle Class that welcomed Workers who built and grew things, even without a college degree.

Today, those same Workers are fighting for the Protect the Right to Organize Act (PRO Act), a piece of common-sense legislation that would give Workers a fair shot at economic mobility and the right to form Unions.

It gives Workers a voice and a stake in America - Building Back Better, as well as an ability to bargain for a family wage and to demand safety and dignity on the job.

Nowhere did the need for the PRO Act become more clear than within Amazon's warehouses, where Workers began organizing to negotiate for better conditions after tens of thousands of them contracted COVID-19 in 2020.

These efforts were led by Workers like Jennifer Bates in Amazon's warehouse in Bessemer, Alabama, and Derrick Palmer in Amazon's Fulfillment Center in Staten Island, New York.

Jennifer, Derrick and hundreds of thousands like them are the reason packages land at our doorsteps and Amazon's profits skyrocket.

A Union would mean Amazon could hear from Jennifer, Derrick and their Co-Workers, identify problems and solve them - together.

A Union would push Amazon to invest in its Workers - who can take pride in their work and fuel growth, and in return be able to come home from work healthy and with enough money to take their kids on a vacation or save to send them to college.

Amazon has fought tooth and nail against every Unionization effort that has taken place at its warehouses.

In Bessemer, the company spent nearly $10,000 a day on Union-Busting Consultants.

It also resorted to shameful, and possibly illegal, tactics to squash organizing attempts.

Unfortunately, Amazon Workers are not alone.

To Continue Reading This Labor Perspective, Go To: www.newsweek.com/build-back-better-give-workers-voice-stake-opinion-1611484?fbclid=IwAR1ljTXkyY8yMZaZcW3WC65S3M6eqCYh2C6Vp2Z0WQzlbTixqlBT2jdZBRI