âItâs All About Respect. Weâre Tired Of Being Under-Appreciated. You Got To Stand Up For Whatâs Right.â - Striking Frito-Lay Workers âContemplate Sacrifice In Fight For Betterâ Wages & Working Conditions 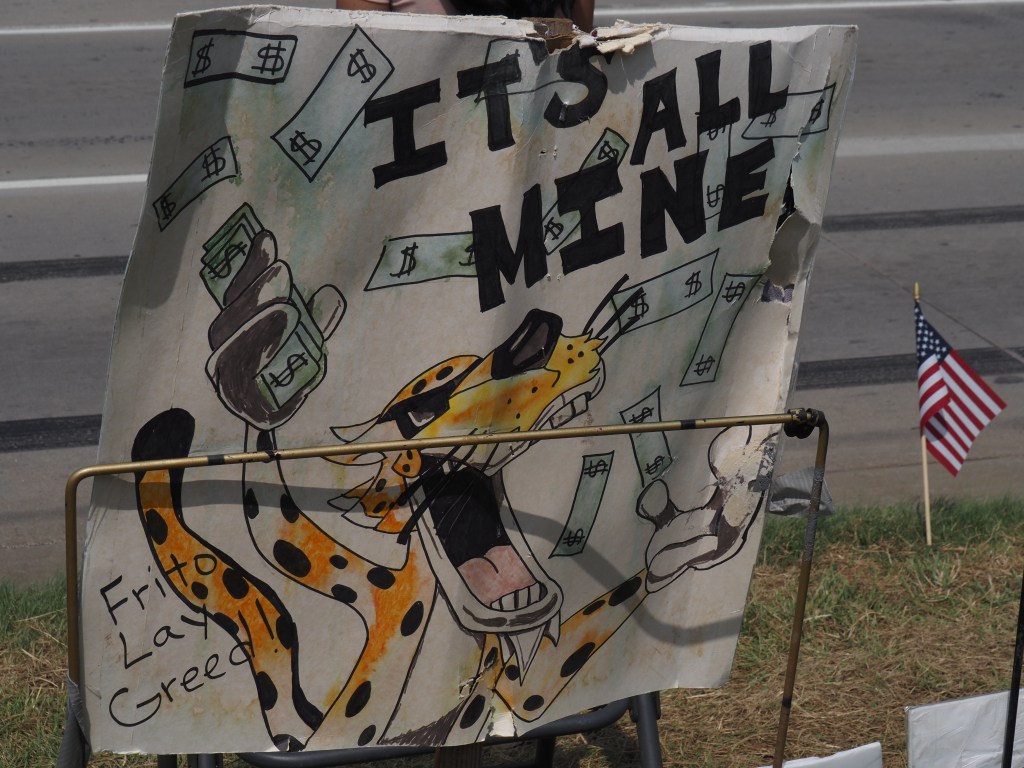 (TOPEKA, KANSAS) - It is more than 90 degrees outside the Frito-Lay plant in Topeka, but standing in the picket line feels cool compared to inside the warehouse, where at 7 a.m. most days temperatures are already peaking over 100, said Reyna Corbus, who is one of more than 500 Workers on Strike at the plant - demanding higher wages and more limited hours.

Since July 5th, Workers have gathered across from the warehouse entrance with signs asking for public support and chastising Frito-Lay.

Last week, Corbus came equipped with a hand-painted sign made by her daughter depicting a boot stomping on Workers attempting to speak up.

Many of the Employees of this plant describe feeling like the image on that sign - silenced or stepped on by Frito-Lay.

Working in strenuous and scorching conditions without proper compensation, as she has done for 20 years, is unsustainable, Corbus said.

“We need to start to be treated like humans,” Corbus said. “We give our life to the company because we have spent so many years away from the family.  We already talked to the company so many times and they just don’t want to give us anything.”

Union Members rejected a contract offer from Frito-Lay with an annual 2% wage increase because for many Workers, that would be less than 50 cents per hour.

Additionally, because of Worker shortages, many Employees are subjected to forced overtime and work up to 84-hour weeks.

Paul Klemme, Chief Steward of Local 218 of the Bakery, Confectionery, Tobacco Workers and Grain Millers (BCTWGM) Union, said many departments have not seen more than 20- to 40-cent raises in the past six to eight years, which made Frito-Lay’s offer so offensive.

Under the Union Contract that expired the day Workers walked out, Members of the Bargaining Unit made anywhere from $16.33 to $38.42 per hour, depending on the job.

“This isn’t a greed issue,” Klemme said. “The last ten years Frito-Lay has started to treat their Employees worse and worse and worse, so it’s finally snapped on this contract.”

Klemme said better Worker safety is on their radar when the company said it will resume negotiations this week with the Union.

The Warehouse Workers’ efforts have attracted support from Members of other departments, as well.

Mario Wheat has worked at this Frito-Lay plant for 14 years in a variety of roles, including boxing and shipping.

He said his pay is not ideal, so he joined the picket line both for himself and to show solidarity.

Wheat said he knows Co-Workers who have not been able to take a day off in more than two months.

He said workers deserve a raise that reasonably accounts for the growing cost of living: “It’s all about respect - money and respect,” Wheat said. “We’re tired of being under-appreciated.  This is a sad man because nobody wants to be out here, because we’re losing money.”

To Continue Reading This Labor News Report, Go To: https://lawrencekstimes.com/2021/07/19/striking-frito-lay-workers/