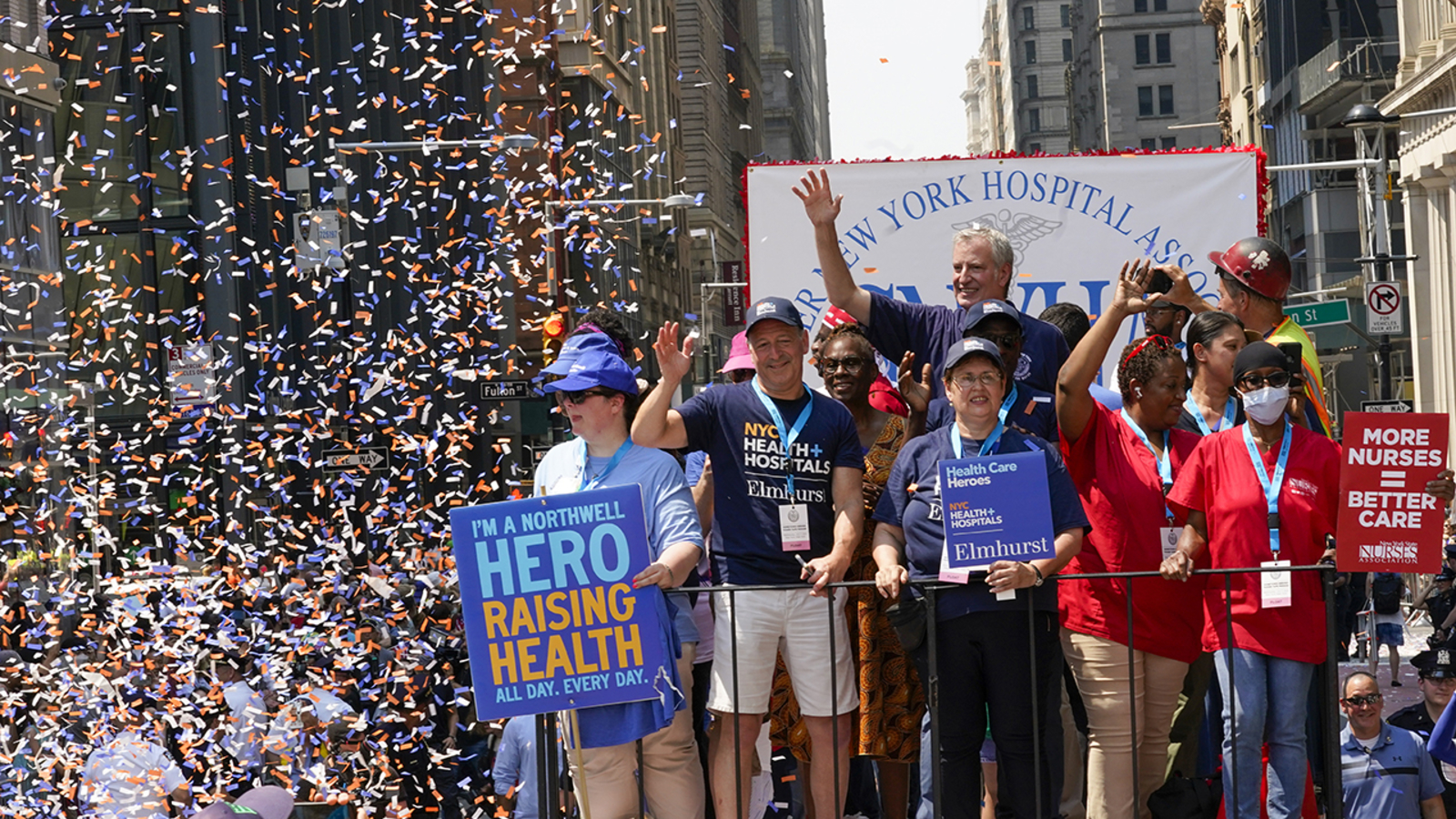 (NEW YORK CITY) – New York City threw Essential Workers a ticker tape parade along the Canyon of Heroes earlier this month and somehow, Gotham’s gilded oligarchs were spared the unsavory sight of marchers wearing “I Saved Your Asses From COVID-19 And All I Got Was This Lousy T-Shirt” gear.

Exhausted Health Care Workers and their comrades in children’s services, transportation, retail and other frontline sectors appeared too giddy about surviving the one-time epicenter of COVID-19 and putting the worst of the ongoing pandemic behind them to pass up a well-deserved shot at the biggest block party New York City has to offer.

Marching together, Workers knew they deserved all the accolades the tired town could muster.

Yet, even this most forgiving atmosphere where heaps of blue and orange confetti were periodically blasted from the backs of municipal pickup trucks couldn’t obscure the level of Worker resentment and anger roiling just beneath the highly-produced pomp and pageantry.

Parade placards declaring: “Not All Heroes Wear Capes” and “Our Labor Saved Lives,” carried an edge.

As much as he would’ve liked, hapless outgoing Mayor Bill de Blasio still couldn’t get everybody on a float.

The American Federation of State, County & Municipal Employees’ (AFSCME) District Council 37 - the largest Public Employees Union in New York City with some 150,000 Members - told Hizzoner just what they thought of his self-serving party by simply not showing up.

Other Unions joining DC 37 in its parade boycott, including those representing the Fire Department’s Bureau of Emergency Medical Services (EMS), as well as the United Probation Officers Association (UPOA), also had no stomach for the naked hypocrisy of patting bone-weary Workers on the back, while at the same time continuing to deny them fundamental things including pay parity, early retirement and a fair contract.

“If the mayor wants to celebrate the Front Line City Workers who put their health and safety on the line to keep New York running at the height of the pandemic, he can start by ensuring every City Worker has a fair contract that pays a Living Wage,” the UPOA said in a statement.

Just a week before the Hometown Heroes Parade, some 200 Retired City Workers took to the streets of lower Manhattan to protest a secretive backroom deal swapping out their Medicare Health Care Plans with private Medicare Advantage - ones costing them thousands of dollars a year.

“I worked thirty-four years,” Retired Special Education Teacher and United Federation of Teachers (UFT) Member Gloria Brandman said at the scene. “I was promised Medicare and supplements paid for by the city.”

Nationwide, Front Line Workers who risked all throughout the pandemic are still waiting for fundamental job protections, vital health care coverage, a $15-an-hour Minimum Wage, the right to organize and enforceable workplace safety standards to protect them against the further spread of COVID-19 and its emerging variants.

Instead, what they are getting is an economic ass-whooping consisting of stagnant wages, vanishing unemployment benefits and rising consumer prices.

To Continue Reading This Labor Perspective, Go To: www.laborpress.org/american-workers-are-owed-a-lot-more-than-empty-accolades-and-parades/