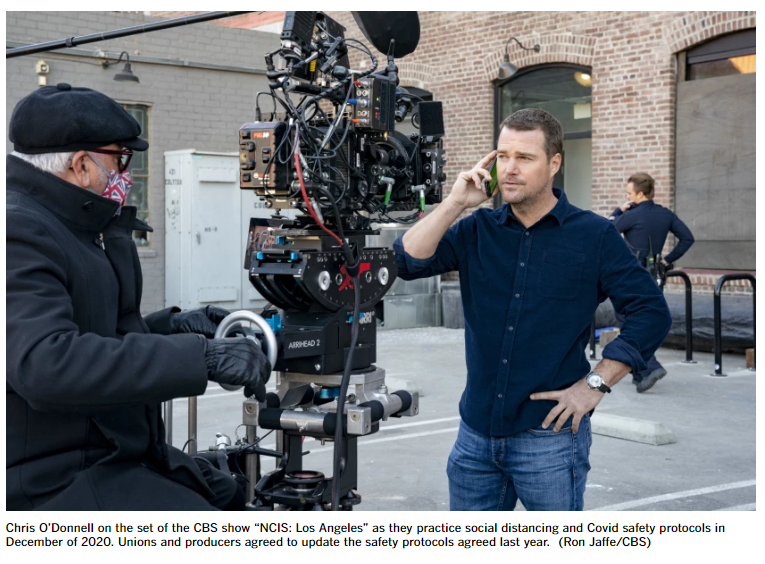 (LOS ANGELES, CALIFORNIA) - Hollywood Workers may have to be vaccinated to work on Union film sets under new COVID-19 safety requirements.  Producers will have the option to mandate vaccinations for their cast and crews working in close proximity to Actors, leading Entertainment Industry Unions and an alliance of Hollywood producers said.

The measure is one of several protocols that are being updated along with relaxed testing and masking requirements in a new agreement that will run until September 30th, according to the joint statement signed by multiple Unions and the Alliance of Motion Picture and Television Producers.

The short-term deal with the Screen Actors Guild-American Federation of Television and Radio Artists (SAG-AFTRA), the International Alliance of Theatrical Stage Employees (IATSE) and other Unions eases some of the safety protocols put in place last Fall that provided for sick pay, testing, masking and other safety measures intended to prevent the spread of the Coronavirus.

After that agreement lapsed on June 30th, the groups began negotiating ways to loosen the restrictions to facilitate film production.

The new measures were expected to reduce testing and sanitation requirements, helping to lower costs for producers.

“The COVID-19 Safety Agreement is the outcome of unprecedented coordination and solidarity between the Unions and collaboration with employers to develop science-based protocols that minimize the risk of COVID-19 virus transmission in the industry’s unique work environments,” the organizations said in their statement. “The protocols have driven a successful rebound of film and television production while prioritizing safety for casts, crews and all on-set Workers.”

The shutdown caused by the COVID-19 Pandemic last Spring devastated the entertainment industry as nearly 300,000 jobs were lost in creative industries in California, according to one estimate.

The Return-To-Work Agreement reached last Fall, which includes compensating Crew Members who take time for testing and for quarantining, has largely allowed the industry to get back to business.

The number of outbreaks linked to film sets has been low, but producers have continued to struggle to raise financing and insurance because of the risks of shutdowns.

The earlier protocols separated cast and crew on sets into different zones, with different testing and social distancing requirements - depending on how closely they had to work together.

In Zone A, where Actors perform, crew had to be tested three times a week or more.

Sets, gear and transport vehicles had to be sanitized frequently.

This raised costs and slowed down filming.

Now productions on a case by case basis will be able to mandate that the Workers in zones A of their sets be vaccinated.

The groups said testing frequency may also be adjusted for certain areas in the United States and Canada where COVID-19 incidence remains very low.

To Directly Access This Labor News Story, Go To: www.latimes.com/entertainment-arts/business/story/2021-07-19/hollywood-unions-producers-back-to-work-agreement-covid-vaccines-testing