The CWA Launches A âBig, Nationwide Build Broadband Betterâ Campaign - Drive âHopes To Convince Congress To Wire The Entire County & Have Well-Paid Workers With The Right To Organize Do Itâ 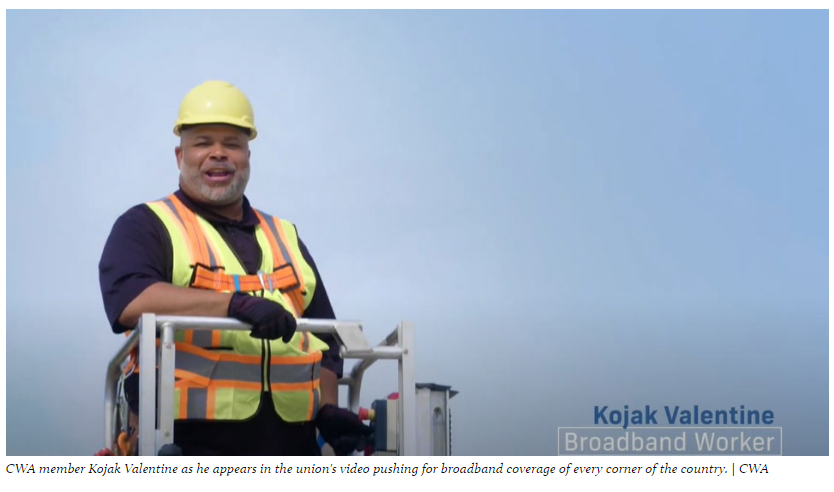 (WASHINGTON, D.C.) - The Communications Workers of America (CWA) have launched a big, nationwide Build Broadband Better drive to convince Congress to wire the entire country -and have well-paid Workers with the right to organize do it.

The campaign includes a petition to Congress a TV and Digital Ad campaign, and a Broadband Brigade of current Wireless Workers to fan out nationwide to push the cause.

Congress and the Democratic Biden Administration are paying attention to the issue.

The initial Coronavirus Rescue Law included several billion dollars to expand the wireless network, and all versions of the follow-up legislation - including the compromise version of Biden’s American Jobs Act, the “hard” infrastructure bill - add even more.

The Coronavirus Pandemic exposed massive holes in broadband and Internet access, especially for People of Color and low-income households in both rural areas and central cities, the CWA says.  It also revealed how dependent the U.S. now is on such access, as a lack of broadband meant no Internet access for tens of thousands of school kids forced to fall back on Zoom and distance-learning when schools had to shelter at home to combat community spread of the viral plague.  And the kids couldn’t learn because either they lacked up-to-date technology to do so or, often, their communities weren’t wired.

School kids “shouldn’t have to go the McDonald’s parking lot” with their tablets to do their homework by receiving Wi-Fi via broadband, CWA President Chris Shelton says.

That also means those Workers must have the right to organize, unfettered by bosses’ interference and intimidation, too, the petition declares.

“If the pandemic taught us anything, it taught us everybody needs broadband.  It’s like electricity or water,” Shelton said. “CWA has been pushing for universal high speed internet access for fifteen years.  We support a shared partnership between private companies and the Federal Government to get this done, but Congress needs to make sure it’s done right, with experienced, trained Union Workers - not low-wage subcontractors who make a quick buck and skip town.  It demands any legislation with Federal broadband money also prohibit companies receive the cash from subcontracting the work in order to undercut its Union Employees’ jobs and standards and that would protect Workers’ right to organize a Union.”

“Expanding broadband access will help students learn and the economy grow,” he says. “When we make sure the work is done by experienced Union Members - that means reliable service and good jobs.

For More, Go To: www.buildbroadbandbetter.org.

To Continue Reading This Labor News Story, Go To: https://peoplesworld.org/article/communications-workers-launch-big-build-broadband-better-drive/