New York State Labor Leaders Join With U.S. Senators Gillibrand & Schumer To Call For The Passage Of The PRO Act 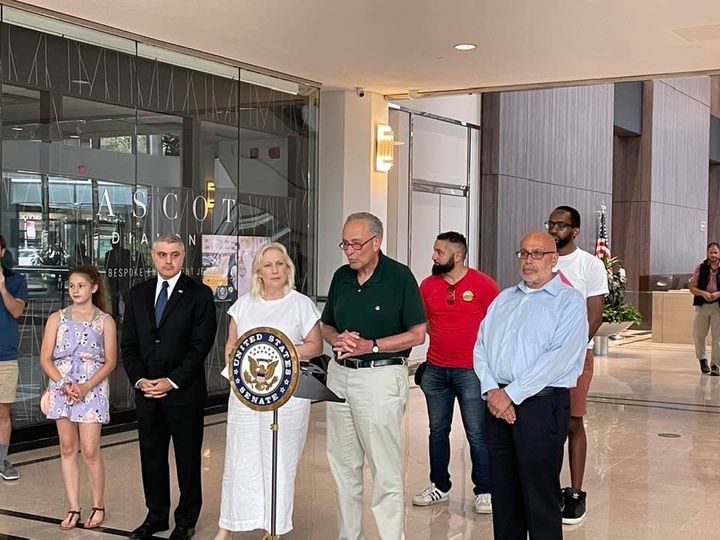 (NEW YORK CITY) – Joined by New York State Labor Leaders during a weekend news conference held in Midtown Manhattan, U.S. Senators Kirsten Gillibrand and Chuck Schumer voiced their support for the passage of the Protecting the Right to Organize (PRO) Act in order to give a voice to Working People.

During the press event that took place on Sunday (June 18th), the Senators were joined by New York State AFL-CIO Labor Federation President Mario Cilento, Retail, Wholesale and Department Store Union (RWDSU) Stuart Appelbaum and Brian Fleurantin, the Care Manager in the Health Home Department at Housing Works in Brooklyn, to discuss the critical nature of protecting Workers’ Rights now more than ever.

Although the struggle to strengthen Workers’ Rights has been decades in the making, the liberties some employers have taken with their Staff during the still ongoing Coronavirus Pandemic has brought this issue to a boiling point, the lawmakers said.

Gillibrand estimates that 500 billionaires were created during the pandemic, while millions lost their jobs and homes - a prime example of the growing economic gap.

“Income inequality has continued to rise and the difference between the haves and have nots has grown,” Gillibrand said.

Gillibrand and Schumer are outraged by the financial divide and are pushing for a recovery that amends the inequities that have grown worse over the past 17 months.

“One of the major reasons the Middle Class is struggling and in trouble is because the Union Movement has been attacked left and right by many in the Republican Party and many in the business community,” Senate Majority Leader Schumer said.

Schumer estimates that if 35% of Americans were Union Members, the Middle Class would grow and succeed - but as of 2021, the United States has a Union Enrollment Rate of 11%.

New York State AFL-CIO Labor Federation President Cilento said: “The PRO Act is the most significant Worker Empowerment Legislation since the Great Depression.  It is a generational opportunity to level the playing field and ensure Workers have a voice in their future through their freedom to organize.  The PRO Act would also serve as an important tool in helping to close the unconscionable gender and race wage gaps that exist in this country.”

With the Pro Act, Workers’ Rights would be protected and strengthened, allowing them to organize and bargain for fairer wages, better benefits, and an overall improvement in their safety, those who spoke at Sunday’s news conference said.

While the PRO Act Bill passed in the House earlier this year, it is now set to reach the Senate floor.

“I am for the Pro Act, as Majority Leader I am going to do everything I can to see that the Pro Act is passed and signed into law,” Schumer promised.

Gillibrand, meanwhile, described Labor Leaders as unsung heroes who have kept a watchful eye over their Members as major corporations have garnered more money while their Employees struggle to pay rent, let alone make ends meet.

She said the Labor Movement has always been at the forefront of the country.

The PRO Act is designed to be the legislative framework to protect Workers by creating more Union Jobs - changing the landscape of the working environment.

The legislation provides several safeguards such as punishing employers who violate Workers’ Rights, supporting Workers from facing retaliation, creating a private right of action allowing Workers to sue when their rights have been denied, support for Workers to join a Union, and more.

To Read This Labor News Story In Its Entirety, Go To: www.amny.com/news/labor-of-love-senators-gillibrand-and-schumer-call-for-the-passage-of-the-pro-act/