âI Like American Labor Laws. I Like To Know That Iâm Part Of A Workforce That Respects Human Dignity And Follows A Theme Of Caring For Citizens And Humanityâ - Detroit Bikes Is âWorking To Bring Bicycle Manufacturing Backâ To The USA 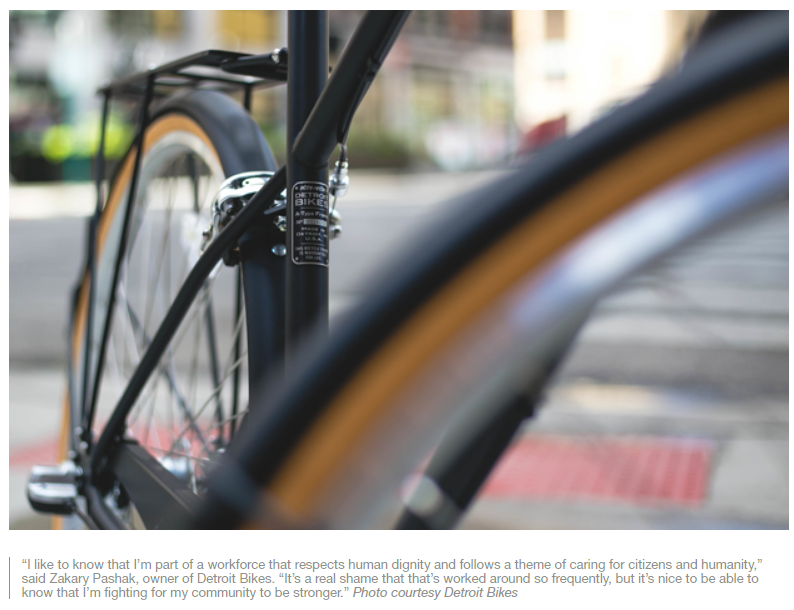 (DETROIT, MICHIGAN) - Detroit Bikes makes simple, easy-to-use bikes that work in urban settings and are proudly Made in America.

For Zakary Pashak, a Canadian-born musician and one-time candidate for Calgary City Council, urban transportation policy is a source of fascination and inspiration.

So much so, in fact, that in 2011 he founded Detroit Bikes, which is today the only bike manufacturer in the Motor City.

“I just figured there’s a better way to move around a city than haul (a car around),” Pashak said. “They’re not the best solution for getting around cities and they kind of make cities worse when we focus on them so much.”

Unfortunately, there was a major hole in the market for well-made, easy-to-use bicycles.

Most bikes in America fall into one of either two categories: Expensive, complex bikes for athletics and other niche uses or cheaply-made foreign imports.

For someone looking for a reliable bike to get around a city, there were not a lot of options.

That’s when Pashak decided to go to Detroit and start making bikes.

“This would be a bike built to make cities better in a city that has a wonderful history,” he said, adding that it “kind of fits with the themes of this city to produce what I think might be an old technology, but it represents the future of urban transportation.”

Detroit Bikes took over a former sign factory and after about a year, started producing its first batch of bikes.

It wasn’t easy - the bike industry in America had collapsed years ago as brands shifted production abroad, particularly to China, where government support and cheap labor allowed them to cut costs at the expense of American Workers.

Today, few of the components of bikes are Made in America on a large scale.

That’s a challenge for Detroit Bikes, which has no choice but to import some components, like brakes, to their U.S.-based manufacturing facility, where they make the bicycle frames out of American-made steel.

Detroit Bikes would love to make all their components in America, Pashak said.

But right now, when the U.S. bike industry is so small, it’s not possible.

You would need to set up 40 different factories for the various bike components to completely reshore the industry, which Pashak said will first need more frame-making and more efficient, high-volume assemblies to be set up here in America.

But Pashak believes that once you get enough local production moving again, the rest will follow: “The bike industry has a sort of conflicted view of what Detroit Bikes is and what we’re doing.  A lot of people in the industry are threatened a little by me saying ‘hey this is actually possible,’ and so the industry as a whole doesn’t want to celebrate Detroit Bikes, saying ‘no we have to buy bikes from China, it’s the only way.’  We’re certainly right now a little ahead of the rest of the group.”

“I like American Labor Laws,” Pashak said. “I like to know that I’m part of a workforce that respects human dignity and follows a theme of caring for citizens and humanity.  It’s a real shame that that’s worked around so frequently, but it’s nice to be able to know that I’m fighting for my community to be stronger.”

To Continue Reading This Labor News Report, Go To: www.americanmanufacturing.org/blog/detroit-bikes-is-working-to-bring-bicycle-manufacturing-back-to-the-u-s-a/

You Can Check Out All Of Detroit Bike’s Products Here.