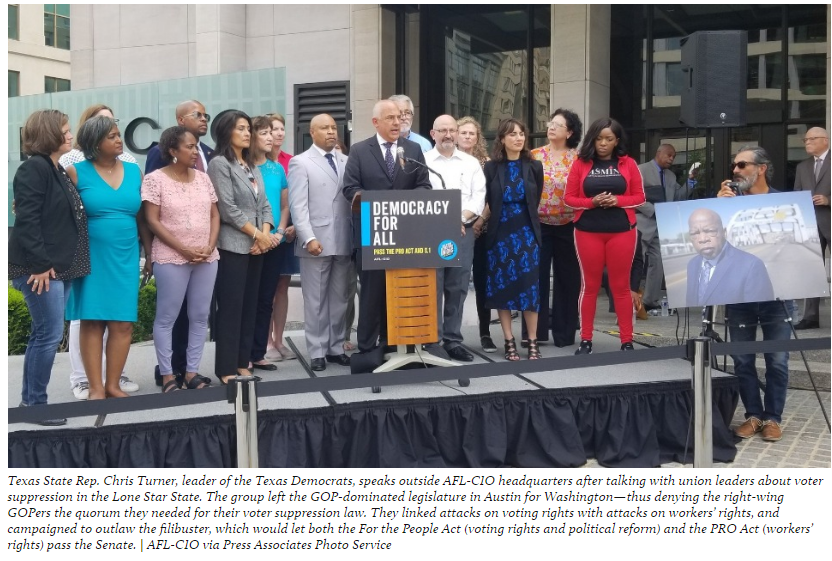 In an outdoor press conference held at National AFL-CIO headquarters, located just blocks from the White House on the now-renamed Black Lives Matter Plaza, the lawmakers and Union Leaders said those causes are one and the same.

And Trumka pledged a joint crusade for both.

And they also made the point that the solution to attacks on Voting Rights and Workers’ Rights rests in legislation pending on Capitol Hill, specifically S1 - the comprehensive election and voting reform For The People Act, and the Worker-backed Protect The Right To Organize (PRO) Act, the most pro-Worker Labor Law rewrite since 1935.

But both are held hostage to a Right-Wing GOP Senatorial Filibuster.

But the Texans also carried the message - as did Trumka - that it’s time to break that too.

“It’s time for the Senate to be courageous and lead the way for the PRO Act and S1 and the rest of the Workers First Agenda,” declared Trumka. “Those attacking voting and those attacking Unions are one and the same, what Dr. King called: ‘A twin-headed creature spewing anti-Negro epithets from one mouth and Anti-Labor propaganda from the other mouth.’”

“These are the Founding Fathers of January Sixth,” Trumka added, referring to the Trumpite insurrection and invasion of the U.S. Capitol in a coup d’état attempt to keep their leader, Donald Trump, in the Oval Office and overthrowing the 2020 election of Democrat Joe Biden.

Those same interests also produce “Massive inequality of income, opportunity and power and the purging of voter rolls,” Trumka said. “We are going to fight them together.  On every single front.  With everything we have.  Democracy is not promised.  It has to be protected when it’s threatened.  It has to be perfected so it can be passed onto the next generation.”

The Texans sounded the same theme, as did other speakers, including National AFL-CIO Secretary-Treasurer Liz Shuler, American Federation of State, County & Municipal Employees (AFSCME) President Lee Saunders and Wade Henderson of the Leadership Conference on Civil and Human Rights.

“In our House (of labor), Voting Rights and Labor Rights are one.  Economic justice and racial justice go hand-in-hand,” Shuler said. “We see a fundamental assault against Democracy - the Workers’ right to vote at workplaces (for Unionization) and their right to vote at the ballot box.  If you don’t vote, you don’t count (in the eyes of the Right-Wingers from coast to coast.”

And the point of the Rightists’ 400-odd Anti-Voter Bills in 48 states, analysts point out, is to ensure that Black and Brown People not only don’t vote, but can’t vote.

Thus the Rightists stay in power, able to impose their nativist and corporate agenda on everyone else.

Meanwhile, the National AFL-CIO wants its state and local affiliates to conduct an intense door-to-door on-the-ground drive for the PRO Act from July 17th through July 23rd.

To Read This Labor News Story In Its Entirety, Go To: https://peoplesworld.org/article/texas-dems-afl-cios-trumka-link-voting-and-workers-rights/