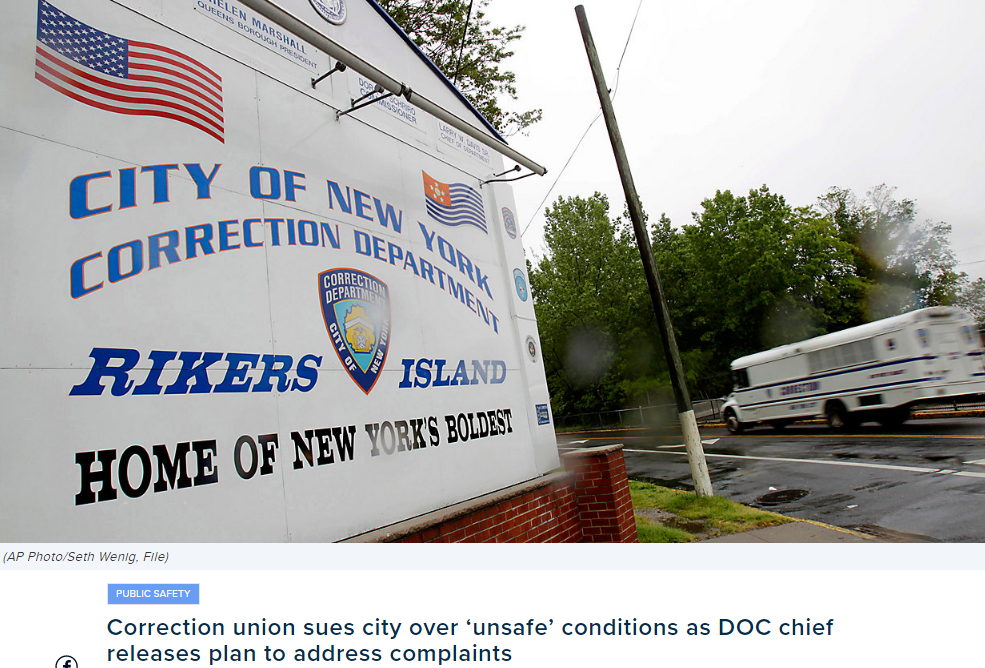 (NEW YORK CITY) – New York City’s Jail Officers Union has sued the Department of Correction, alleging Officers are being forced to work in “unsafe and unhealthy working conditions,” including 20-plus hour shifts and failing to provide adequate protective gear at the height of the COVID-19 Pandemic.

A recent report from a court-appointed independent monitor excoriated its Staff and management, finding widespread failures and low morale.

The city is currently investigating an incident where an inmate, Robert Jackson, 42, was found dead in his cell on June 30th after a Guard left his post due to exhaustion.

After the Correction Union snubbed the just-held parade honoring Essential Workers, the department’s own Commissioner, Vincent Schiraldi, lambasted Employees who repeatedly call in sick, forcing others to work double and triple shifts, saying that those out sick “should be ashamed of themselves.”

“We are in crisis mode right now, based on everything we've seen in the past few months in our city jails,” City Council member Keith Powers, who chairs the committee on criminal justice, said in an interview before the announcement of the lawsuit.

The city’s budget for the new fiscal year added $27 million to the department’s budget, bringing it to $1.18 billion, as well as a new class of 400 Correction Officers, which Union Leaders say is vital - and the bare minimum of new recruits necessary - to keep the department functioning, even as detainee advocates criticize the staffing bump.

“Nothing is being done to help us,” Benny Boscio, Jr., the head of the Correction Officers’ Benevolent Association, which sued the city, said. “Officers are at their breaking point.”

The city Law Department said it will review the lawsuit and respond in the litigation.

The suit, filed in Queens State Supreme Court, names the Department of Correction and the state’s Department of Labor as defendants, suing the latter agency to enforce city laws mandating certain accommodations for Workers.

Schiraldi, who has been the department’s commissioner for six weeks, released a plan, entitled #NewDayDOC, which is meant to address complaints of Guards, including several issues included in the Union’s lawsuit.

Schiraldi declined to comment on whether the lawsuit has merit.

To Continue Reading This Labor News Report, Go To: www.ny1.com/nyc/all-boroughs/news/2021/07/16/correction-union-sues-city-over--unsafe-and-unhealthy--conditions