âIt Really Might Be A Good Idea To Join A Unionâ - Reuters Analysis Show Union Workers âGet Higher Pay, If They Can Joinâ 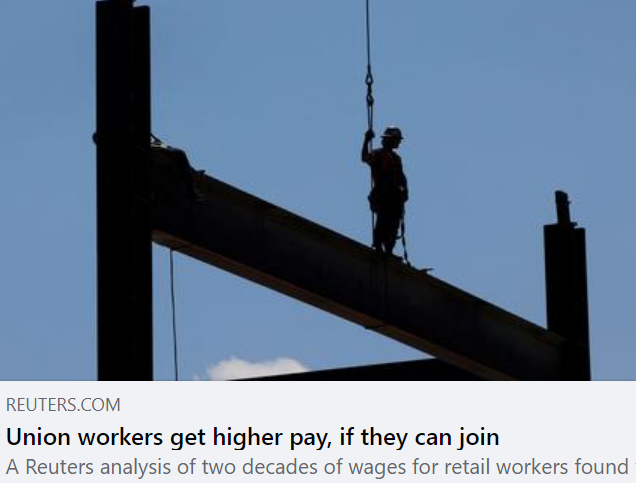 A Reuters analysis of two decades of wages for Retail Workers found that the pay advantage Union Workers have enjoyed over Non-Union Employees in that sector is increasing.

The weekly pay differential between Union and Non-Union Workers widened from $20 in 2013 to more than $50 in 2019, according to the July 9th report.

One reason for the widening pay gap is that Unionized Workers tend to work more hours per week and on a predictable schedule, while Non-Union Workers often have a “variable schedule” that depends on how busy management thinks the store might be.

One Non-Union Worker commented in the Reuters report that his employer could increase his hourly rate without actually giving him a “raise” - because the pay increase can be offset by reducing his weekly hours at work.

The findings contradict a claim commonly made by employers that Unionization will lead to lower pay for Employees (like Amazon, the country's second-largest private employer).

The analysis also further illustrates the connection between the decline of Unionization in the United States and rising income inequality, spurred by a major shift in power from Workers to corporations and a regulatory regime that leaves Workers unprotected against employers' anti-Union efforts.

Americans view Unions more favorably now than they have since 2003, according to a separate Reuters report on May 13th.

More than 65% approve of Unions and Workers won 72% of Union Elections in the past five years - meaning a majority voted in favor of Unionizing.

They won nine out of every 10 last year, amid concerns about workplace safety and health that were growing, or newly revealed, because of the COVID-19 Pandemic.

That’s the highest win rate for Workers seeking to unionize in a decade.

Still, there were only 5,804 Union Elections in both the Public and Private Sectors in the past five years, according to the July 9th Reuters report.

And only 11% of the eligible U.S. workforce actually belonged to a Union in 2020, according the Bureau of Labor Statistics (BLS).

It also bears mentioning that the latest Reuters analysis confirms what many other studies have shown: Unionized Workers get paid more and have better benefits and the dearth of Unionization in the country is linked to skyrocketing income inequality.

Report adIn 2020: Non-Union Workers had median weekly earnings that were 84% of earnings for Workers who were Union Members ($958 versus $1,144), according to the BLS.

Analysts at the Economic Policy Institute (EPI) calculated in 2019 that American Workers were losing out on roughly $200 billion each year in pay and benefits that they could have had under collectively bargained Union Contracts.

President Joe Biden’s White House has also taken to citing this EPI study, according to the May 13th Reuters article and a May 14th report by Business Insider.

To Continue Reading This Labor News Story, Go To: www.reuters.com/legal/legalindustry/union-workers-get-higher-pay-if-they-can-join-2021-07-12/?fbclid=IwAR3tALHpGEwky-wDyBSAWKrR_iL2I31DtLTKWKd3_bBAg83ke6NzgeymI9Q