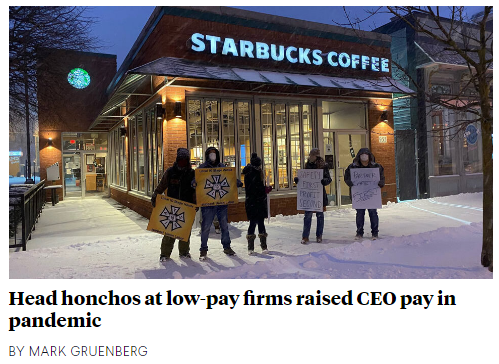 (WASHINGTON, D.C.) - 2020’s growth in pay inequity between Workers and CEOs confirms the “executive base salary reductions” touted during the COVID-19 crisis were just lip service, per this year’s National AFL-CIO Executive Paywatch report, which was unveiled by the Labor Organization’s Secretary-Treasurer Liz Shuler.

The Executive Paywatch website - the most comprehensive, searchable on-line database that tracks CEO pay, shows that the CEO of an S&P 500 company received, on average, $15.5 million in total compensation in 2020.

During a painstaking year of unspeakable loss and economic turmoil, where millions of Working People lost their jobs through no fault of their own, this year’s report shows an S&P 500 CEO’s pay has increased, on average, by more than $700,000.

“Working People bore the brunt of COVID-19 and its impact on the U.S. economy,” said Shuler during the report’s release. “Last year, the Unemployment Rate peaked at 14.7% in April, with a record (41) million layoffs in the United States.  While many of those jobs have come back, there was a net loss of nine million jobs in 2020.”

The Nation’s growing levels of inequality showcase the importance of passing the Protecting the Right to Organize (PRO) Act, a monumental Labor Law Reform Bill currently in the U.S. Senate, the National AFL-CIO says.

The PRO Act will remove barriers to organizing and transform our country’s economic system into one that works for all Workers, not just corporate interests and billionaires, the National Labor Federation said.