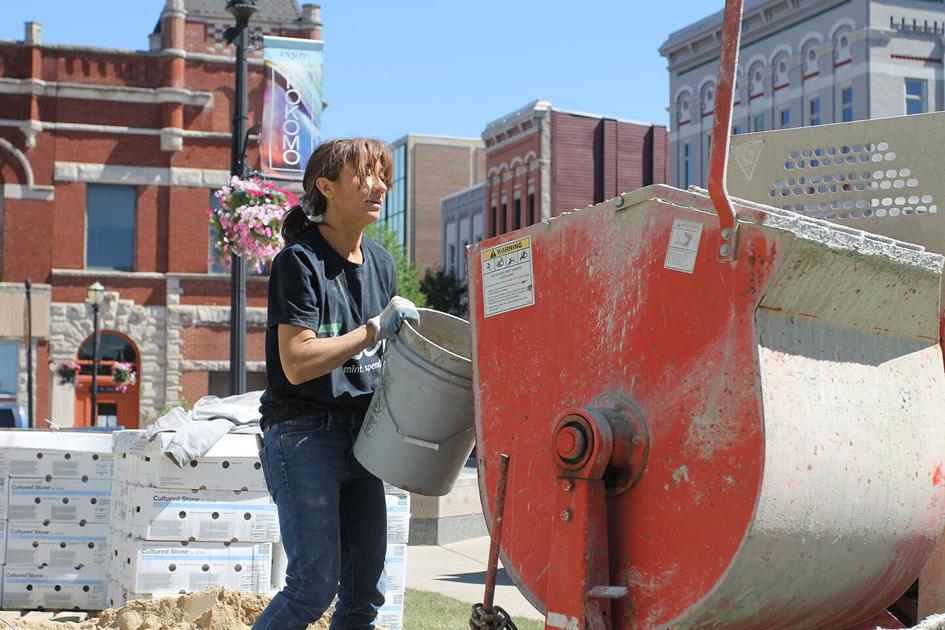 (KOKOMO, INDIANA) - When Eve Anderson’s Dad began taking her on job sites when she was younger, she never considered she could get into the Trade herself and carry on the family tradition of bricklaying.

It wasn’t until she moved back to the City of Firsts at age 39 after living in California when she realized nothing was stopping her from getting into brick masonry.

Now, she’s a fifth-generation Bricklayer and entering her second year as an Apprentice, being taught by her father, Mark Anderson, 66.

“In California, I would always call Dad and say, ‘We have to do a book of all the stuff your grandfather made and your dad built and you built.  I want to make a book of all this masonry stuff.’  I had no idea I’d be helping him years later.  So we’re building together now and it’s really cool,” Anderson said.

When Anderson moved back to Kokomo last July, Anderson’s Dad invited her to a job site to help out on a project.

While he wasn’t expecting her to stick with bricklaying “because it’s kind of hard,” Anderson immediately decided she wanted to.

Now as an adult on the job site, she said she fell in love with the Trade right away and how it allowed her to be creative, hands-on and active.

Still, as the only woman Bricklayer on job sites, she said it was intimating at first and something she had to overcome: “It was so scary because it was all these guys and I didn’t know what I was doing.  I was the only girl out there, but Dad is like, ‘Come on. It’s OK.’  It’s kind of scary at first and I like cried in the car.  But it was fine.  Everybody is nice.”

Mark was impressed with his daughter’s tenacity and strength - but not surprised by how quickly she picked up bricklaying - and he said she quickly earned respect among the men.

“They accepted her because she just doesn’t stop.  She wasn’t a slacker.  She just worked.  It was like, ‘Wow, look at her push that wheelbarrow.’  She weighs like eighty pounds and she’s got this big wheelbarrow for the mortar she uses.  The guys are like, ‘Wow,’” Mark said.

One of the projects the father and daughter worked on last Summer was a residential home that was being renovated with massive 80-pound limestone blocks.

While Anderson couldn’t pick them up by herself, she’d get mortar to Anderson and strike the joints for him.

Last Fall, as it started to get colder outside, Mark said he wondered whether Anderson would be OK with the cooler temperatures.

She was and he was impressed that it didn’t seem to bother her at all.

For Christmas, he got her a level to work on a landscaping project, building a brick wing next to steps by her home, and he said it was clear how much she already had learned.

“She just started doing it, and I was like, ‘Oh my gosh, it’s really good,’” Anderson said.

To Continue Reading This Apprenticeship And Training Labor News Story, Go To: http://kokomoperspective.com/kp/news/a-woman-in-the-trades-eve-anderson-continues-family-tradition-as-a-fifth-generation-bricklayer/article_939331ba-de71-11eb-a2a2-5b63f22da4e7.html?fbclid=IwAR0fYas4Z_y16pbBuLAy3uHtBD5Yq8Rruvjp6CMRryYTkrvEFL7DR4kBJDc