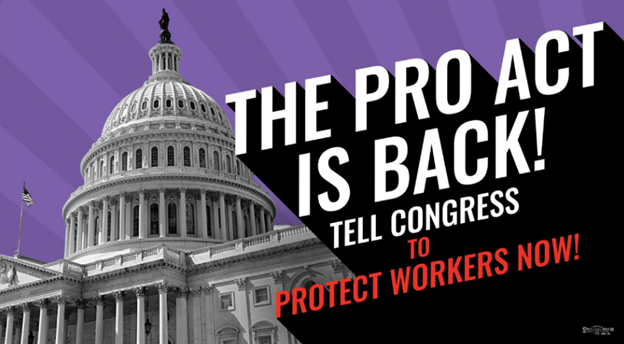 (WASHINGTON, D.C.) – U.S. Senator Bernie Sanders said that the Organized Labor-backed PRO Act will be included in a $3.5 trillion spending package set to be pushed through the Senate by Democrats.

When asked by reporters on Wednesday (July 15th) if the Protecting the Right to Organize Act, (PRO Act) would be included in the Democrats’ reconciliation Plan the Vermont Senator said: “Yes, it is.”

The news came after President Joe Biden spent the day on Capitol Hill rallying support for the $3.5 trillion package that will be paired with the more modest $580 billion bipartisan infrastructure plan.

Republicans and business groups have expressed heavy opposition to the PRO Act, which passed the Democratic-controlled House earlier this year - but was dead on arrival in the Senate, which is evenly split.

The PRO Act would enact sweeping changes to the employment landscape, including adjusting what kinds of Workers can be classified as Independent Contractors - who work for a company, but don’t have to be given mandated employer benefits such as health care.

Corporations such as Uber might be compelled to place Workers on their payroll instead of just paying them for the services provided by Drivers.

The PRO Act would also and essentially end Right-To-Work (for less) Laws that have been enacted in 27 different states that stop Unions from requiring Employees pay dues or fees.

The PRO Act says Employees who benefit from a Collective Bargaining Agreement can be compelled to contribute to the Union.

The PRO Act would also allow the National Labor Relations Board (NLRB) to impose new fines for Labor violations and would prevent employers from permanently replacing Workers who engage in strikes.

The PRO Act would additionally make it easier for Unions to be formed by stopping companies from holding mandatory meetings to express opposition to Unionization, among other provisions.

While Sanders said that the PRO Act would be included in the reconciliation package, the process requires the Senate Parliamentarian to approve which budget-related aspects can be included in the final legislation, which could mean the final package could be pared down compared to the original version.

To Directly Access This Labor News Report, Go To: https://news.yahoo.com/3-5-trillion-reconciliation-bill-213300673.html?guccounter=1&guce_referrer=aHR0cDovL20uZmFjZWJvb2suY29tLw&guce_referrer_sig=AQAAABy2qC25lBAE6W8ZihdR7DZNmdZ1M329IfuKMFYSK5vvd7S_ugr95Z0EayWijxigNhy0DvC_AHtKn40YLiZw-LPKR8V5LMu6QqJG5cNc6CKKXY7IhKxzWUTeZ3Pss1a-cgDQ-AJy2LEoQV_90R8SCB93CXb5m8XMpLjHN3UWVtNJ