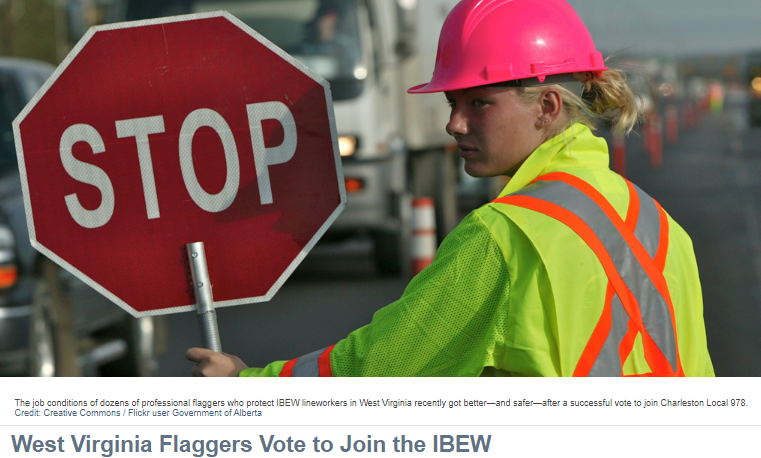 (STATE OF WEST VIRGINIA) - High-voltage line work comes with more than its fair share of dangers, from shocks and falls to hazardous underground conditions, But when International Brotherhood of Electrical Workers (IBEW) Lineworkers are up in buckets or working below street-level, they depend on professional Flaggers to keep them safe from a lesser-known, but no less dangerous hazard: traffic.

That’s changing, and for a few dozen men and women in West Virginia who work for Area Wide Protective, it’s already making their jobs safer and improving their quality of life.

Working with IBEW Charleston Local 978 and the IBEW’s Fourth District, the AWP Flaggers from the Huntington and Parkersburg offices voted in March to join the IBEW, setting first-contract negotiations in motion.

Just like Lineworkers, Flaggers are on the job in every type of weather.

They typically understand what they’re signing up for when they apply for these jobs, he said, but it can be very tough, dangerous work.

AWP, which has 60 offices in 20 states across the Eastern U.S., provides traffic-management services to support a variety of infrastructure and utility projects.

Members of Local 978, which primarily represents American Electric Power Lineworkers in the Mountain State and Southwestern Virginia, are well-acquainted with the role AWP’s Flaggers play in keeping IBEW Members safe.

Right now, hourly rates typically start around $10 an hour, he said, which is not much more than some folks could make working at a fast-food restaurant or a big box store.

The two offices’ service area covers the counties roughly north of Interstate 64 and west of Interstate 79, up to the top of the state’s northern panhandle.

They also serve nearby portions of Ohio and Kentucky, and McCray noted that Local 978 had received lots of support from nearby IBEW Locals, including Huntington, W.Va., Local 317, Parkersburg, West Virginia Local 968 and Marietta, Ohio Local 972, which is across the Ohio River from Parkersburg.

With such a large coverage area, and depending on a given day’s location, Richards said, Workers might be forced to drive two or three hours just to get to work.

That trip also might include a required detour to pick up Co-Workers who don’t have access to reliable transportation.