âThis Is Not Just A Slap In The Face To Our (150) Members, But To Our Entire Western New York Communityâ - Unionized Buffalo News Employees âFight Demands Of Out-Of-Stateâ Owner 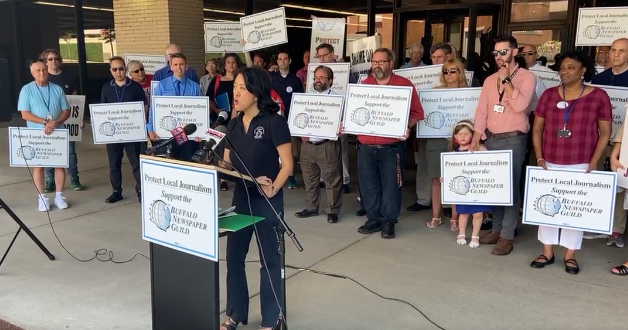 (BUFFALO, NEW YORK) - The Buffalo Newspaper Guild, bolstered by the outpouring of support from community leaders across the region, is calling on The Buffalo News to stop its assault on the region’s daily paper and local jobs.

At a news conference held today (July 15th), the largest Union at The Buffalo News announced a series of community actions - including a billboard, petition and Byline Strike - in response to Lee Enterprises’ continued demands to weaken job security protections and outsource local Union Jobs to its Non-Union hubs in other states and Mexico.

Lee, the Iowa-based media chain that bought The News early last year, is seeking the power to lay off Guild-represented Workers for any reason.

Lee also wants to freeze Workers’ pensions, even though the pension costs the company nothing, and slash many other Employee benefits.

Ultimately, Lee’s bargaining proposals, which include outsourcing the jobs of Copy Editors and international award-winning Page Designers, will weaken the paper and hurt the community’s access to strong local news coverage.

On top of that, the company has insisted on the right to get rid of the paper’s overworked Customer Service Representatives and send those jobs to Lee’s Call Center in Mexico. 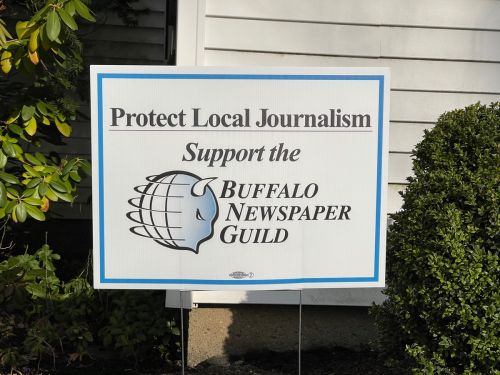 In the weeks leading up to today’s announcement, more than 20 elected leaders, all of them concerned about the paper’s future, have publicly and eloquently expressed support for the Guild’s fight.

The Buffalo Newspaper Guild is hoping more elected leaders and others in the Western New York Community will join their fight.

And it would appear that is already happening.

Guild Representatives pointed to a community petition that has already garnered more than 1,000 signatures since Monday.

“Clearly, the community stands with us in the call for Lee Enterprises and The Buffalo News to be better corporate citizens,” said Kim Leiser, the Guild’s Bargaining Team’s Chief Negotiator.

“We will spare no expense to protect our Members and to protect the paper that our community deserves,” she said.

The Buffalo Newspaper Guild, one of the oldest Newspaper Unions in the United States, represents roughly 150 Buffalo News and weekly Sun paper Employees, including most Newsroom Staff and Employees in Circulation, Accounting and Prepress.

To Learn More About The Buffalo Newspaper Guild’s Campaign And To Sign Its Petition, Go To: www.ProtectLocalJournalism.com.