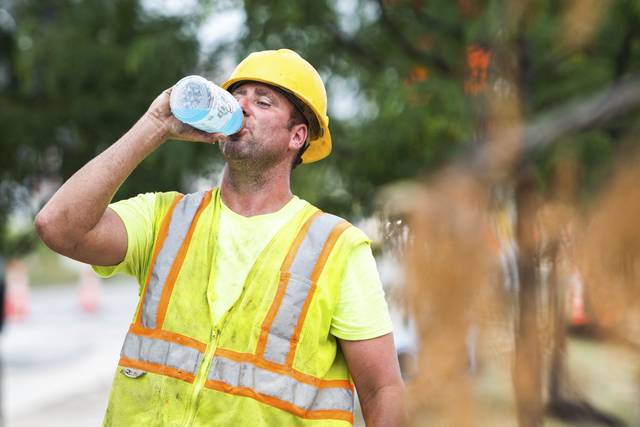 That especially includes Unionists who build and repair energy infrastructure, such as Members of her home Union, the International Brotherhood of Electrical Workers (IBEW), she adds.

Shuler outlined what should be the central role of Workers in battling global warming in a one-on-one Zoom discussion with Tony Podesta, the long-time Democratic heavyweight and founder of the Center for American Progress (CAP), a noted D.C. Think Tank.

And she made the point that global warming is here, proceeding more quickly and negatively than people realize.

She gets evidence both from data and personally: Talking with her parents in her home state of Oregon, which is now suffering under a combination of 100-plus degree days and ravaging forest fires.

So is most of the Western U.S.

But that doesn’t seem to budge global warming deniers in corporate suites or Congress.

So, facing inaction on battling the rapid warming of the planet, restoring U.S. manufacturing, and creating well-paying Union Jobs in Green industries, CAP examined developments in states, instead.

Its report, available on CAP’s website, americanprogress.org, the group found encouraging state and local moves at least on battling global warming and in restoring U.S. manufacturing and domestic supply lines for “Green” projects.

“The enormous opportunity now facing the Nation - the creation of millions of good Union Jobs to build a clean energy-driven economic recovery - flows in great measure from lessons learned through successful state leadership,” its summary says. “State, tribal, and local governments are laying a road map for jobs, justice and climate solutions.  These include actions taken to promote job quality in new and fast-growing clean energy industries (and) efforts to expand existing industries that support union jobs critical to the clean economy, such as in transportation, water infrastructure, and manufacturing.”

Those jobs are linked to state and local “efforts to advance Labor Standards and the right to organize, ensure government spending does not undercut Workers’ ability to bargain collectively, and promote local hiring and equitable access to good jobs,” it adds.

Shuler admits such progress is necessary.

It’s also a key Labor demand as it lobbies for infrastructure legislation.

“In very plain words, do we think Federal tax dollars” for infrastructure projects “should support low-wage low-quality jobs in the renewable sector or high-wage high-quality jobs?,” Shuler asked. “The pattern we’ve seen so far” in the Green Sector is of “low-wage, low-quality jobs dependent on imported goods, some of which are made in very sketchy conditions.”

In its infrastructure lobbying, the Labor Movement has argued for the high-wage, high-quality Union Jobs.

Those requirements were in Biden’s initial $2.3 trillion Infrastructure Bill, since junked in favor of a “compromise” $974 billion Bill that Biden worked out with a bipartisan Senatorial Coalition.

To Continue Reading This Labor News Report, Go To: https://peoplesworld.org/article/afl-cio-wants-workers-front-and-center-in-battling-global-warming/

Union Jobs in the petroleum, mining and power production industries need to be protected.

Green energy jobs are off shore jobs with most manufacturing jobs located overseas.

That is simply not acceptable.

For example, all of the parts for industrial windmill farms received at our local ports came from overseas, namely Germany, South Korea and Brazil.

These included generators, blades and towers for the industrial windmill farms.

No American products made by American Unionized Workers.

In WNY, we have already seen devastating job losses in Unionized Workers at local power plants, now in the mothball stage.

If WNY manufacturing is to continue and flourish in the future, it must have low cost, and absolutely reliable power resources.

Green energy in the form of industrial windmill farms and solar farms do not provide the low cost or the reliability.

Just look at the rolling brownouts and blackouts in California or the Texas power-grid meltdown with the wind and solar farms failed to provide any power what so ever during the massive ice storm.

No, its time to back the Unionized Energy Workforce, not target them.

Craig E. Speers, Past Executive Board Member - Buffalo AFL-CIO Labor Council Posted by Craig E. Speers on July 15, 2021 at 8:55 am